Dr. Christopher Brown, Rector of Trinity Church, Potsdam, New York has been called by Bishop George Sumner to serve as the new Canon to the Ordinary, starting January 1, 2022.  Brown brings extensive experience in parish ministry, wide participation and leadership in the Diocese of Albany, and deep theological training. In addition to the traditional responsibilities of the Canon to the Ordinary,  Brown will also serve as the Dean of the Stanton Center, stewarding its curriculum and faculty, and will provide oversight to the vocations program and ordination process of the Diocese. 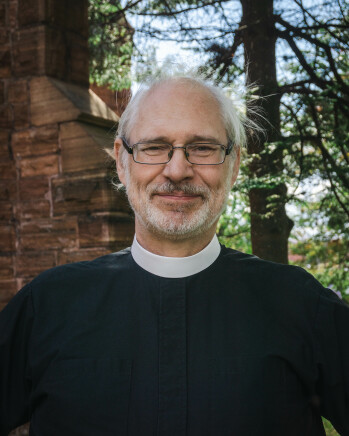 Brown was raised in Cambridge, Massachusetts, and has a long family history in San Antonio, Texas.  "My parents were what Friedrich Schleiermacher called 'cultured despisers of religion.'" After studying Asian religions in adolescence and college he came to faith in Jesus Christ in his early twenties. He graduated from General Theological Seminary in 1985, and in 2001, received a PhD. in Systematic Theology from Union Theological Seminary. He served in parishes in and around New York City until moving to the Diocese of Albany in 2000. Since then he has been the rector of Trinity Church, Potsdam, a small college town close to the Canadian border. Brown has served as a local dean, and as chaplain to the Community of St. Mary on the grounds of the diocesan retreat center, and is the Canon Theologian and Archdeacon in the Albany Diocese. "I have done a lot of work in adult education, continuing education for clergy, and vocational formation," he said. "I am married to Starr; we have two adult children, Nathaniel and Amelia, and a new son-in-law, Austin. In my spare time, I play jazz guitar."

Bishop George Sumner said it is his pleasure to welcome Brown to the diocese.  "He brings the theological and pastoral gifts to serve in the various roles that Canon to the Ordinary calls for," Sumner said. "He is friendly, personable, and plays jazz guitar! I also want to welcome his wife Starr, a nurse, to our fellowship."