The 2020 PatriotPaws Golf Tournament is scheduled for May 15 at Firewheel Golf Park in Garland. The tournament raises money to provide service dogs to veterans in need.

The Brotherhood of St. Andrew's in the Dallas Diocese has raised money for several years to provide a service do to veterans without any cost to the veteran.

Here's how it started, in the words of member Don Candy: In April of 2012 Patriot Paws received a black lab puppy from a certified source and entered it into the training program. The Dallas Assembly of the Brotherhood of Saint Andrew was at that time involved in executing the fourth annual Patriot Paws Charity Golf Tournament. The mission of the Patriot Paws organization is to train and provide service dogs of the highest quality, at no cost, to disabled Americans and others with mobile disabilities in order to help restore their physical and emotional independence. On the day of the tournament, the Director of the Patriot Paws organization, Lori Stevens, made a surprise visit with the new puppy and asked the Brotherhood to name it. After a very short meeting of board members the new pup was named Saint Andrew and nicknamed Andy. Fast forward two years of intensive training to the graduation ceremony for six Patriot Paws Service Dogs. After several days of interaction between the Vets and dogs Chad and Andy chose each other. The rest is history. While Chad was deployed in his second tour in Iraq a Rocket Propelled Grenade (RPG) exploded in near proximity to the upper right area of his torso. He suffered Injuries that caused the loss and partial loss of the right side of his body. He suffered a traumatic brain injury, his neck was fractured in seven places which has affected his balance, nerve damage makes it difficult to use his hands, and he has been diagnosed with post-traumatic stress. In April 2014, Chad received service dog Andy, a male black Lab, at a graduation held at the Rockwall training center. According to Chad, Andy helps him by bringing things to him and picking up dropped items for him, and by calming him, especially during storms. His kids love to come over and play with Andy during his dog time, and Chad believes he is now a better father to them. “He makes people laugh. He makes me happy.” 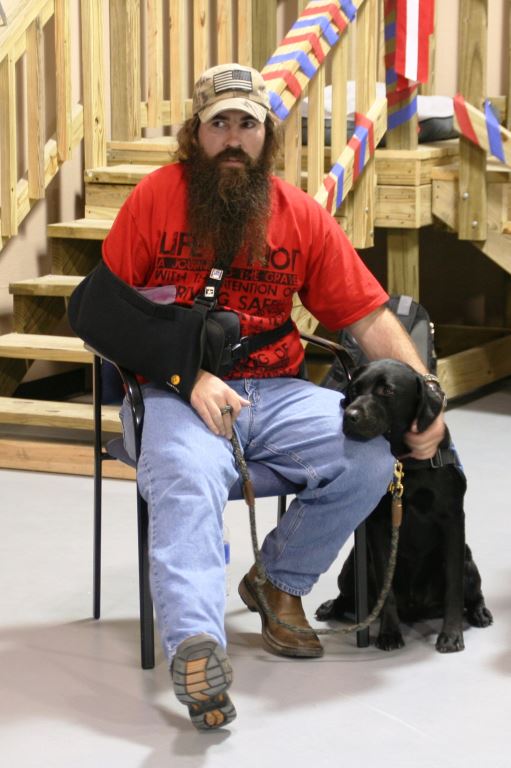 Jim Vineyard and I had about an hour with Chad, two on one. We were cautioned that he might be leery of speaking with strangers but we found him open and willing to chat about his (and our) experiences in the military. He was proud of his service and wished he hadn’t been hurt so he could have finished his job to bring peace to Iraq. Chad is a godly man who served his country well and held no regrets. We are happy that we could play a part in bringing he and Andy together.