Who is the Messiah? 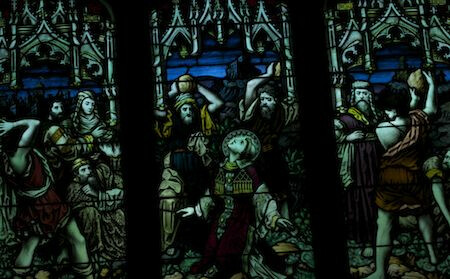 We just celebrated the Feast of the Confession of St. Peter. Here is the Gospel reading from that day:

When Jesus came into the district of Caesarea Philippi, he asked his disciples, "Who do people say that the Son of Man is?" And they said, "Some say John the Baptist, but others Elijah, and still others Jeremiah or one of the prophets." He said to them, "But who do you say that I am?" Simon Peter answered, "You are the Messiah, the Son of the living God." And Jesus answered him, "Blessed are you, Simon son of Jonah! For flesh and blood has not revealed this to you, but my Father in heaven. And I tell you, you are Peter, and on this rock I will build my church, and the gates of Hades will not prevail against it. I will give you the keys of the kingdom of heaven, and whatever you bind on earth will be bound in heaven, and whatever you loose on earth will be loosed in heaven."[1]

The confession of St. Peter, that Jesus is “the Messiah, the Son of the living God,” is a turning point in Matthew’s Gospel. Peter’s confession is so significant that Jesus underscores it as an insight given by God the Father.

So why is the disciple’s understanding of Jesus as the Messiah so pivotal?

Messiah is a title rooted in the Old Testament meaning one anointed with holy oil. The Kings of Israel were often referred to as anointed, such as Saul (1 Sam. 12:3), David (2 Sam. 19:22), Solomon (2 Chron. 6:42), Zedekiah (Lam. 4:20), and even the Babylonian king Cyrus (Isa. 45:1). Though the word is not used, the expectation for a Messiah is established in God’s Covenant with David:

Through the words of the prophets, an expectation is set for the Messiah to be born in the Davidic line to reform and restore the Jewish nation (cf. Isaiah 11, 40-66).

The Gospel writings bear witness that Jesus is the long-awaited king. Matthew and Luke offer the lineage of Jesus as a descendent of David (Matthew 1, Luke 3). They also refer to as the Christ (cf. Matthew 1:16), a Greek equivalent to Messiah from which we derive words such as chrismation. Andrew went with haste to get his brother Simon (who will be called Peter) when he met Jesus, proclaiming, “We have found the Messiah.”[3]

The conception of Jesus as Messiah to the disciples was a worldly outlook. It was beyond Peter’s imagining that Jesus should go to Jerusalem only to suffer at the hands of the chief priests and the scribes, be killed, and on the third day be raised.[4] The eternal, spiritual nature of the Kingdom of Jesus does not seem to be understood until after his crucifixion and resurrection, when Jesus points his followers back to this teaching.[5]

In Paul’s writings, Jesus is so closely understood as the Messiah that the title is held in close association with his given name as Christ Jesus. In his For Everyone series, Tom Wright translates this as King Jesus to bring out the meaning of Christ as a proper title and convey it’s meaning. An image of Jesus as God’s Messiah is painted by Paul in his letter to the Philippians:

Let the same mind be in you that was in Christ Jesus, who, though he was in the form of God, did not regard equality with God as something to be exploited, but emptied himself, taking the form of a slave, being born in human likeness. And being found in human form, he humbled himself and became obedient to the point of death— even death on a cross. Therefore God also highly exalted him and gave him the name that is above every name, so that at the name of Jesus every knee should bend, in heaven and on earth and under the earth, and every tongue should confess that Jesus Christ is Lord, to the glory of God the Father.[6]

[1] Matthew 16:13-19. Quotations from the Bible are from The New Revised Standard Version Bible, copyright 1989 by the Division of Christian Education of the National Council of the Church of Christ in the USA.

What Do We Mean by "The Real Presence?"

The Witness of Scripture

The New Testament indicates that the first Christians believed that Christ is present when we come together to break bread and share the common cup in Eucharist, following the example and command he gave to his disciples. St. Paul’s witness to this in his letter to the Church in Corinth:

For I received from the Lord what I also delivered to you, that the Lord Jesus on the night when he was betrayed took bread, and when he had given thanks, he broke it, and said, ‘This is my body which is for you. Do this in remembrance of me.’ In the same way also the cup, after supper, saying, ‘This cup is the new covenant in my blood. Do this, as often as you drink it, in remembrance of me.’ For as often as you eat this bread and drink the cup, you proclaim the Lord’s death until he comes. Whoever, therefore, eats the bread or drinks the cup of the Lord in an unworthy manner will be guilty of profaning the body and blood of the Lord. (1 Cor. 11:23-27)

These writings are complimented by the witness in the Gospel of John, relating Jesus’s teaching the day after the feeding of the five-thousand:

I am the living bread that came down from heaven. If anyone eats of this bread, he will live forever. And the bread that I will give for the life of the world is my flesh. (John 6:51).

Though we partake in Christ’s Body and Blood in Eucharist, he remains bodily present in heaven, as exemplified in this passage from Acts:

Repent, then, and turn to God, so that your sins may be wiped out, that times of refreshing may come from the Lord, and that he may send the Christ, who has been appointed for you - even Jesus. He must remain in heaven until the time comes for God to restore everything, as he promised long ago through his holy prophets. (Acts 3:19-21)

Our understanding of the Real Presence, then must hold to these and other related Scriptural references.

A Look at the Catechism

Along with Baptism, Holy Eucharist is described by the Catechism[1] as one of the two great sacraments of the Gospel. As a sacrament, the Holy Eucharist consists of an outward and visible sign that conveys an inward and spiritual grace, given by Christ as sure and certain means by which we receive that grace.[2] In the sacraments of Baptism and Eucharist, God has paired ordinary worldly substances that humans need to sustain life with spiritual significance.

In Baptism, the outward action is that a person is washed by water in the name of the Father, the Son, and the Holy Spirit. The grace received is that they are brought into union with Christ in his death and resurrection, born into God’s family the Church, forgiven of their sins, and beginning new life in the Holy Spirit.[3]

In Eucharist, the outward action is that bread and wine is given and received according to Christ’s command (cf. 1 Corinthians 11:23-27 quoted above). The spiritual grace received is the Body and Blood of Christ given to his people, which is received by faith. The presence of Christ in the sacrament of Eucharist is a Holy Mystery. Jesus has ascended into heaven and is seated at the right hand of the father until his coming again, and yet we receive his Body and Blood in this sacrament though the power of the Holy Spirit.

Are the Elements of Bread and Wine Changed?

Perhaps this tension is best captured in the traditional words of distribution:

The Body of our Lord Jesus Christ, which is given for thee, preserve thy body and soul unto everlasting life. Take and eat this in remembrance that Christ died for thee, and feed on him in thy heart by faith, with thanksgiving.

The first sentence of each comes from our Catholic roots, grounded in the idea that the bread and wine are changed into the Body and Blood of Christ. The second has origins in the Reformation, following which focus on the bread and wine as signs that represent the grace once offered on the cross and received by faith.

This ambiguity is preserved in Rite II, where the priest prays that the bread and wine would be sanctified “by your Holy Spirit to be for your people the Body and Blood of your Son, the holy food and drink of new and unending life in him.”[5] (Book of Common Prayer, 1979. p. 363)

Great care has been maintained in our Prayer Book to assert that the Body and Blood of Christ is made present as we partake in the bread and the wine without making definitive claims as to how this happens. It is an act of grace that we receive through the power of the Holy Spirit by faith, a Holy Mystery in our life in Christ Jesus. This idea is summarized in a 1991 statement of the Anglican-Roman Catholic International Commission, “The elements are not mere signs; Christ’s body and blood become really present and are really given. But they are really present and given in order that, receiving them, believers may be united in communion with Christ the Lord.”

[1] The Catechism provides an outline of the faith of the Episcopal Church and can be found in the Book of Common Prayer, 1979, beginning on page 845.

The Rev. Bob Corley is Rector of St. Mark's in Irving

Posted by The Rev. Bob Corley with