Theology Matters: What is the Nature of God Revealed in Jesus? 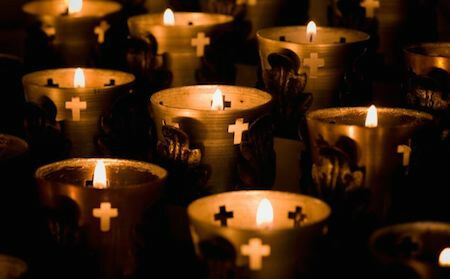 Tell me if you’ve ever heard this one: “You’re just like your mother/father,” or “Yep, the apple doesn’t fall far from the tree,” or “Like father/mother, like son/daughter.”

Of course, you have! Whether it’s to highlight a good behavior that praises you both, or a negative behavior that brings you both down, these phrases are in some way meant to say that part of who you are is in direct relation to who you came from.

Case in point: my son, to his own admission, is our absent-minded professor. He is very smart, but he loses everything. This is a trait that I (of course) tie directly to his mother, who is literally a beautiful and brilliant professor who daily can’t find her keys.

While this is a very elementary example, it introduces a way to look at the mystery that is the relationship between God the Father and His only son Jesus Christ. You see, while my son has the traits of his mother in part, Jesus, as the “only begotten of the Father,” has in fullness all that is God, for he is “God from God, Light from Light, true God from true God.”

While this relationship remains a part of the mystery of the Holy Trinity, what is clear is what this reveals about the very nature of God himself, and reciprocally, of His Son. In the words of Bishop Kallistos Ware in his book The Orthodox Way, “to speak of God as Son and Father is at once to imply a movement of mutual love.” Therefore, as the Son exists eternally with the Father, so too love exists eternally in their primal bond of mutual self-giving.

Further, while this dynamic and self-giving love relationship exists eternally within God, so too it exists with mankind and all creation, the very products of their divine love.  This love became self-evident when God the Son, in a supreme act of love to redeem mankind, “emptied himself” and became one with us through the taking on of human form. He “humbled himself and became obedient to the point of death – even death on a cross.” (Philippians 2:7-8). Therefore, in acts of mutual love for each other, for humanity, and for all their creations, as God the Son emptied, so too God the Father poured out, for “God so loved the world, that he gave his only begotten Son, that whoever believes in him should not perish but have everlasting life.” (John 3:16)

Reflecting upon the nature and mystery of God’s eternal, dynamic, and self-giving love, priest and theologian Thomas Forsyth Torrance wrote in his book The Christian Doctrine of God, One Being Three Persons, that “the love God revealed in Jesus Christ is His total unconditional self-giving to mankind, love in which He does not withhold himself from loving to the utmost or cut short its full movement, and it is upon that love that our hope of redemption and resurrection is grounded.”

However, while the incarnation, death, and resurrection of Jesus Christ are pivotal moments and movements of love in understanding the very nature of God, so too is every word that scripture speaks of Christ’s life. In reflecting on the nature of God in Christ, Pope Benedict XVI, in his encyclical God is Love, states that in the incarnation, “the divine activity of God now takes on dramatic form” so that “when Jesus speaks of the shepherd who goes after the lost sheep, of the woman who looks for the lost coin, or the father who goes to meet and embrace his prodigal son, these are no mere words: they constitute an explanation of his very being and activity.” Therefore, in the person of Jesus Christ, the fullness of God’s love is revealed and lived out in an “unprecedented realism.”

In every word of love and forgiveness Jesus spoke to his neighbor and in every act of love and healing Jesus extended to the broken, God the Son points to and reveals God the Father, for Jesus says, ““I am the way, and the truth, and the life. No one comes to the Father except through me. 7 If you know me, you will know my Father also.” (John 14:6-7a) Therefore, in the words of Archbishop Michael Ramsey, it is not enough to say that Jesus is divine, but more, that “God is Christlike.”

Therefore, the answer to the question “What is the nature of God revealed in Jesus?” I would say, like father, like son…” God is love.” (1 John 4:8)

Posted by The Rev. Clayton Elder with