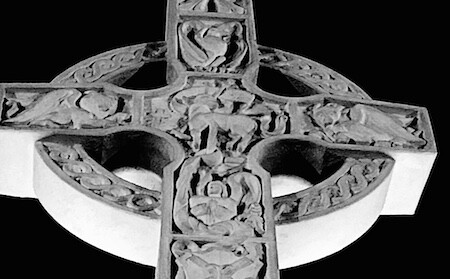 "This is the night, when Christ broke the bonds of death and hell, and rose victorious from the grave."

So much significance is bound up in this one line from the Exsultet at Easter Vigil, and yet we must say more. Not because it is found theologically wanting, but because phrases that stir up matters pertaining to sin, death, and the devil are held suspect.

The supposed "real world" with which we have to do marginalizes such problems, so that the determinative answers of righteousness, life, and Jesus Christ make little sense in response.

Therein lies a matter of great significance. As David Yeago puts it, the resurrection was a "reality defining event, comparable only to creation itself."1

We are not merely affirming belief in the undoing of a death - as though the resurrection was a great act of reversal, by which our greatest enemy was circumvented and life as we know it restored. Rather, the resurrection leaves no room for back-stepping into former things, for it is in moving forward through death that Christ broke its bonds and disarmed the enemy. After which, the Father raised the Son to a new state of life, ushering in a new measure of real stuff in and to the world.

This is new creation we are dealing with in Jesus' resurrection. Nothing of the old can reckon with it, because it is the root of a new world view unlike any other. Leslie Newbigin said "It has never at any time been possible to fit the resurrection into any world view except the world view of which it is the basis."2

So then, the basis of a whole new reality that confronts our world is given in this single most significant resurrection from the dead. It is not a newly developed virtual reality or an augmented reality at the hands of human ingenuity, but a newly created reality from the very hands and wisdom of God.

Faith in a better future tends to look to a different type and form of reality as conjured in the imagination, revolving around what could be. Then there is Christian faith which is actually tethered to a better future through the foretaste of Christ's resurrection, which is the taking up of our earthly stuff and its reformation into imperishable life.

This new reality has been loosed from the bonds of the old, of death and hell, breaking them of their overstayed welcome in the world and power of intrusion into God's new creation.

The level of truth, beauty, and goodness that presents to us in the resurrection transcends the limitations of our understanding, with one foot still in the old order, and yet even when we fully enter this new creation in personal resurrection there will still be mystery in play, because God can never be solved. In this matter, our goal is not to solve it, but to enter into and explore it, in and through the resurrected Christ.

Posted by The Rev. David Thompson with