What Does it Mean to Say the Church is Catholic? 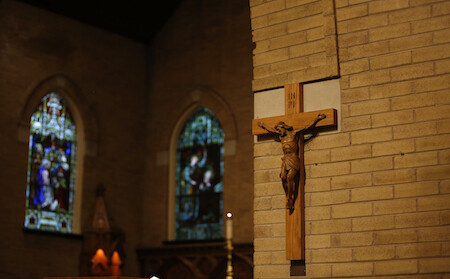 At the most basic level the answer to this question is simple: the Church is catholic “because it proclaims the whole Faith to all people, to the end of time.” (BCP p.854) The word “catholic” means “universal” and so to be catholic is to hold to the Faith and Church which is beyond that of a local sect, tribe, or time period. It was used by the Early Church against challenges by such local sects, schisms, cultural isolation, tribalism, and heresies that undermined the whole Faith inherited by the Church from the Apostles. We are part of that Catholic Church, just as fully catholic as Roman Catholics without being Roman Catholic. Note that the 1662 Book of Common Prayer had no qualms associating the Church of England as being a part of the entire “Catholic Church of Christ”. We are just as much part of the “big C” Catholic Church as the Roman Catholic Church is!

Being Catholic means we do not exist by ourselves as autonomous local entities or individuals. To be catholics is to understand the Church as an international institution transcending all localism or regionalism for a grander vision of a universal Church made of all peoples. If you visit a particular church of the Catholic Church of Christ in Nigeria, Japan, Peru, France, or Australia, you’re visiting the exact same Church! When you join a Parish, you are joining not that individual Parish, but the entire Diocese, the entire Episcopal Church, the entire Anglican Communion, and the entire Catholic Church. So to be Catholic is to also retain the Catholic Order of Bishops, Priests, and Deacons; particularly Bishops in Historic Succession. This ordering unites us as a Church for all people for all time, as the worldwide unification of the Episcopacy stands against un-catholic regionalism. In fact it’s not an understatement to say, as Archbishop Ramsey argued in his excellent The Gospel and the Catholic Church, Bishops are an expression of the very nature of the universal nature of the Gospel itself, and so in that sense integral to the nature of the Church itself.

Being Catholic means we are a Church of every “tribe, nation, and tongue” (Rev 5:4), with no room for ethnic superiority. The Catholic Church of Christ is where there is no Jew, Greek, English, Japanese, Mexican, or Ethiopian. Christianity is not European, nor American, nor even Middle Eastern, but both international and universal. This means two things for missions. First we must take the Gospel to all people. We have a mission to make disciples of Jesus Christ out of every single nation on earth. Because the Church is Catholic the Church cannot leave any people group without the proclamation of the Gospel resulting in Baptized disciples in every nation. Secondly, this means never confusing our culture with the Gospel. Our mission is to preach Jesus, not Western culture; bring the Bible, not the English language; and establish the Church in every nation, not spread American or European culture around the globe. To place one’s ultimate loyalty in tribe, race, language group, or nation is to not be truly Catholic. It’s easy to see why nation-states prefer a less Catholic vision of the Church with less competition to their own demands of loyalty.

Being Catholic is, as St. Vincent said, holding to that believed “everywhere, always, and by all”. (Commonitorium, IV) Christians are not just those who are fans of Jesus’ teachings, but who hold to specific truth claims about who God and Jesus are. To be Catholic is to allow legitimate debate on unclear issues while also holding strongly to the Faith inherited through the Church found primarily in such places as the Nicene Creed. All clergy in the Episcopal Church swore before God and their Bishop that they “believe the Holy Scripture of the Old and New Testaments to be the Word of God, and to contain all things necessary to salvation” and would conform to the “doctrine, discipline, and worship of the Episcopal Church.” (BCP 513, 526, 538) Our Canons further define our official doctrine as that “found in the Canon of Holy Scripture as understood in the Apostles and Nicene Creeds and in the sacramental rites, the Ordinal and Catechism of the Book of Common Prayer.” (IV.2) Catholic Christians take very seriously the obligation not to be clever, but to uphold the Faith of the Church found in the Holy Scriptures seen through the lens of the Catholic Creeds. Believing in the Trinity, Incarnation, and Resurrection are not just good ideas; they are part of the core in how we can claim to be catholic at all. The Catholic Faith is not just following Jesus’ humanitarian teachings, but also of belief in him as the risen Lord and Son of the Eternal Father.

Being a Catholic Anglican in the Episcopal Church

Is that all there is to it? As far as the basic concepts of being part of Christ’s Catholic Church, yes. However when an average Episcopalian talks about being “more catholic”, “High Church”, or “Anglo-Catholic”, there is more than the above implied. Usually they are picking up on something else, something more in terms of piety, emphasis, or worldview. So in addition to what’s found as basic in our Catechism I propose four points as core aspects of what it means to be a catholic-minded Anglican in the Episcopal Church. This could be termed a proposal for a “Catholic Worldview”, or set of distinctives which define being Catholic from other types of being Christian:

The first Catholic distinctive is an emphasis on God working though his material creation instead of opposition, or as St. Thomas Aquinas said: “grace does not destroy nature but perfects it”. (ST I.1.8.r2) The relationship between grace and nature may in fact be the defining worldview feature of being Catholic. The primary example of this theological principal is the Incarnation. So to be catholic-minded is to be Incarnation-centered, viewing salvation as redemption of the material world instead of an escape from its physicality. This implies a few sub points. First, that the physical sacraments actually convey invisible grace. We unapologetically affirm that God works his saving power through physical objects. Second, that the Church is an organized institution founded by Jesus on the Apostles which has been delegated authority, rather than just being a gathering of people or a movement. It’s something we join, not just something we create by gathering. Thirdly, salvation is a synergist experience. God works in conjunction with our wills instead of radical opposition. Fourthly, rituals and ceremonies, vestments and candles, and all other physical aspects of worship are both inherently good and more human ways of worship. Spirit is not opposed to the material creation and so we worship God as embodied spirits, not spirits trapped in bodies. Materialist worship and rituals don’t detract from God’s Spirit because God’s Spirit works though nature, not in opposition to it.

Being Incarnation focused will lead to being Maximalist in the Christian life. As my Dominican Brother Guy Mackey said: the major difference between being Protestant and being Catholic is that Protestants ask “what’s the minimum amount we need to get in” whereas Catholics say “look at all this cool stuff I get to believe in!” Being catholic is more about “Prima Scriptura” rather than “Sola Scriptura”, and so very much reject the Reformed Regulative Principal of Worship as does Article XX. The Bible is primary without the need to reduce all of Christian life to only what the Bible explicitly states, for Bible contains all things “necessary” to “salvation” as per our 39 Articles (VI), not all things useful or helpful in the Christian life. This also applies to art, rituals, prayers, prayer beads, and devotional or spiritual practices. We fully embrace the wealth of traditions, pieties, and practices from two thousand years of Christian witness without the need to constantly turn to a minimalism of bare necessity.

One thing the Church and Sacraments do is place us in a more communal relationship with God. There is an inherent value in community itself; especially the institutional community we call the Church. We don’t read the Bible alone, but as a Church; not just in the present, but the past; making even tradition an inherent authority which shows us in the present the guidance of the Spirit through the generations. Even salvation is more communal. More emphasis is placed on being saved as part of the Church, the Bride of Christ which is more than the sum of us its parts. The Church is the Ark of Salvation whereby in a real sense salvation is applied to the individual by virtue of being a member of God’s covenant people called the Church. Catholics see the Church as not just a voluntary gathering of like-minded believers who join after being saved, but as the creation of God to which we are invited and through which in Baptism we become members of God’s Covenant, Children of God, and so heirs of God’s salvation promises.

Finally, being Incarnational, Maximalist, and Communal leads to a type of soteriological holism. Salvation is more (though not less) than an individual soul getting into Heaven when they die. Salvation is a gradual process which involves the co-operation of our wills with God’s grace, for God’s grace does not destroy our natures but perfects them; though we must always remember that God’s grace precedes even the desire for that grace. (Council of Orange, III-V) One important principle to remember is that the solution must match the problem. If the problem is that we are dead to sin and corrupt in our very natures then the solution must be a true transformation of our natures and purification from inward death into life. Salvation, therefore, is not just a puncticular moment of crisis-conversion Justification, but a lifelong sanctifying process of becoming more like Christ: with ups and downs as we co-operate with God who truly transforms us slowly by his grace. Not only that, but it’s more sacramental: the best answer to “when where you saved?” would be giving your Baptism date! Salvation is in a word, messy. A sanctification though our participation in the sacramental institution of the Church and the Sacraments such as Baptism and Eucharist. It’s not a clean or neat radical point of life change. We may sometimes do well and sometimes badly, and this is the entire process of “working out our salvation” (Phil 2:12) with the trust that God is truly at work within us as we seek him and cooperate with him on our road to be holy as he is holy.

Fr. J. Wesley Evans is Rector of St. Stephen’s in Sherman and a Novitiate in the Anglican Order of Preachers (Dominicans)

Posted by The Rev. J. Wesley Evans with
(Login/Register to leave a comment)