Anglicans and the Arts 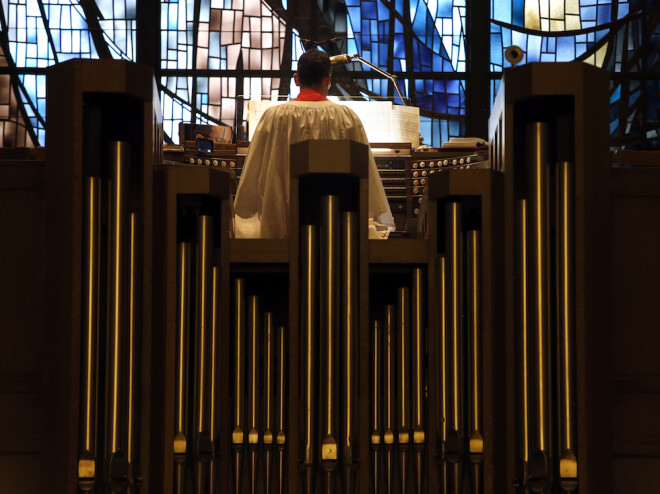 Anglicans have no corner on the use of the arts to express their faith: Michelangelo? Bach? But it has been of great importance, in part because of their less systematic way of articulating doctrine, as well as the stylistic gift of the Prayer Book, which became in translation into many languages the equivalent of Shakespeare. I have selected examples from a range of periods, cultures, and genres. Each of the ten works cited is readily accessible by internet. each offers an important truth of the faith in an artistic mode.

John Donne - poet, No Man is an Island -- This famous poem eloquently presents the solidarity of humankind, Adam, the human. In our age of individualism nothing is more pertinent, that we are a ‘democracy’ in both our sin and our redemption.

Thomas Tallis - composer, Spem in Alliud-- The rich polyphony of this piece bespeaks the catholic side of the 16th century, though its elegaic expresses human anguish more generally. its theme from the psalms (‘in no other have i hoped’) plumbs the depth of our dependence on grace.

Jonathan Swift - satirist, A Modest Proposal-- Swift, an Irish Anglican priest, wrote this scathing satire in the spirit of the prophets. The british government’s blithe disregard for the starvation of Irish children meets the Gospel witness it deserves, offered with the astringent of humor.

Christopher Wren - architect, St Paul’s: After the great fire of 1662, London was rebuilt, beginning with its Churches. The serene symmetry and restrained elegance of St. Paul’s is a fitting sanctuary at the conclusion of reformed Anglicanism original era.

Charles Wesley - hymnodist, Lo He Comes... Who was the founding figure of modern Christianity? Arguably John Wesley, father of the small group. But who is the genius of Anglican devotion, at once liturgical, pietist, Scriptural? his brother Charles in his hymnody. This work joins in atonement theology the thought of Anselm and the feeling of Abelard.

Anthony Trollope - novelist, The Warden: Anglicans often do their theology in ‘ordinary’, in ‘the day of little things,’ in the particularities of the local parish. No one had more insight into its dynamics, its implicit sociology, its drama and hypocrisy, than Trollope. His wit shows the clay pot in which the Gospel is found.

Christina Rossetti, poet, In the Bleak Midwinter: The romanticist movement revived feeling, both in attack and in aid of the Christian faith. its antiquarian retrieval was closely connected to the Anglo-Catholic revival. Her one of the movement’s poets articulates the very heart of our incarnational faith, and locates sanctification in its wake as gratitude (give my heart).

T.S Eliot - dramatist, Murder in the Cathedral: Eliot, convert to Anglo-Catholicism, analyst of modern angst, and theorist of a Christian nation, retrieves one of the great moment of drama (Henry vs. Becket in the 12th century) as a way of thinking about the Gospel and power. It is also a remarkable meditation on the complexities of motive.

-Utukufu Kwa Yesu - praise music. It means ‘praise to Jesus’ and is the opening line in the signature hymn of the east African revival, in Swahili. It is a placeholder for the amazing originality of local church music village by village. Traditional dance and drumming are put in service of interpreting the lections! Youth ministry, piety, evangelism, and music are one!

R.S. Thomas - poet, The Coming: A more ascetical and brooding theology of the priesthood could not be found than the poetry of this Welsh parish priest. The landscape is scorched bare, but in this poem the bleakness makes the loving condescension of the Son all the more clear.

Alan Paton - novelist, Cry the Beloved Country: This novel, about the tragedy of life in apartheid South Africa, is an example of the Anglican Church in its opposition. The suffering of the priest Kumalo over his son is a pastoral theology, conformed to the paschal mystery, in miniature.