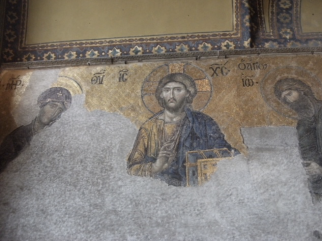 North Africa was in large part the cradle of ancient, Patristic Christianity. To this day there are ancient Churches in the Middle East whose roots go back to that era and who have continued through centuries of life under the caliphates (I have included a picture of a painting of Kurios Pantokrator, which remains on the ceiling of Hagia Sophia, which became the Grand Mosque in Istanbul).  We should note that, in the later 19th Century, when the mission societies returned to the region, their first instinct was to work alongside the ancient Coptic Church, seeking to contribute a reformed element (not particularly successful). While some of these Anglican efforts began as chaplaincies, they have become lively and creative Churches of their own countries.

In recent years, for example, what is now the Church of the Province of Egypt has had a widespread ministry to Egypt, northern Africa, and into Ethiopia.  This has included an outreach to refugees, not least from south Sudan. One element of this ministry is the Alexandria School of Theology, rooted where Athanasius himself taught! There has been a fruitful ministry of hospitality and friendship between clergy and local sheikhs in the Diocese of Egypt which has made a considerable contribution to the national life.

When we turn to Palestine, there has been a number of prominent leaders who have been Anglicans, who have contributed to negotiation with Israel. (Hana Ashrawi was a prominent example).

In recent years, with increasing radicalization in the Middle East, there has been more emigration, not least in Iraq, which has been a threat to the existence of these ancient Christian communities, and which Anglicans have an interest in helping.

I would like finally to mention Iran, where there was a rich ancient Christian Church before the Mongol invasion in the 1200’s. But the Church has continued there, and does so to this day, under heavy persecution since the Revolution. We remember that the famous Bishop Taqhani Tafti had to flee in 1980 after the murder of his son, and his successor Azad Marshall was not able to live continuously in Iran.  But there are vigorous underground Churches in Iran, as well as refugee Churches (an example of which is our own Grace Community).

So the apostolic thread of faith in Persia is not broken, but continues, and ‘the vision awaits the time.’