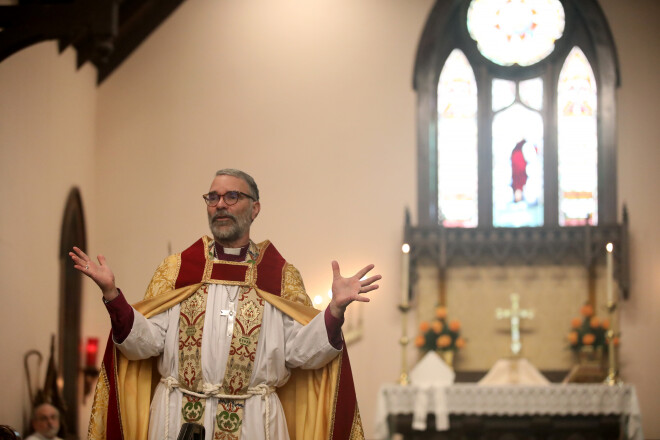 1: A group called “Reveal” studies the spiritual vitality of congregations of various denominations, including our own.  The results were sobering, but the key point, and the more hopeful one, is that renewal of congregations may be correlated with the following:  beginning with salvation by grace, embedding scripture in parish life, encouraging small groups, and having a personal relationship with God. I am encouraged by an emerging desire to figure out what renewal looks like, and to consider these factors. But we do well to note:

2: I want to reiterate a sense I have had throughout my ministry: that we need to reclaim the traditional language of faith, to dig deeper into rich veins of gold in the scriptures.  Maturity as leaving the old language behind was a modernist fallacy.  Hearing anew and with power, rediscovery, “back to the fount,” these express our calling better. An example of this anxiety is found in some contemporary liturgies (one from ‘Enriching our Worship’) is the exclusion of the word “Lord” as overly patriarchal or domineering.  But in fact, references to “Lord” are asserting that God, and not human powers or personalities, rules (a point the Presiding Bishop made in his opening sermon of the House of Bishops).  A second, is the version of the sentence from the Psalms in the Sanctus, which, revised, reads “blessed is the one who comes in the name of the Lord.”  This also needs reclaiming and rehearing, since historically this referred to Jesus!

3: One thing we need to recall is that we are a branch of a rich history of Anglicanism. We recall that we are a Church which was made up, in the time of my own memory, of Anglo-Catholics, evangelicals, charismatics, and “broad church,” in various configurations. I see this variety more in parishes themselves than in the Church’s self-explanation in recent times. In my days as a younger priest, a prevalent account of ourselves was from the 19th century British theologian F.D. Maurice. He imagined that Anglicanism required the interaction of these groups, like flint on flint. This is what we might call a generously liberal view, but it would seem that sometimes our Church has in mind a more constricted account of “liberalism.”  At the very least, what if the Church reclaimed this sense of our need for one another?

4: An earlier blog worried over a recent definition of evangelism, though it may be accurate of how many think about these things in the Church. More to the point is the following definition of William Temple’s which has already been approved by our General Convention: “To evangelize is to present Jesus Christ in the power of the Holy Spirit, that men shall come to put their trust in God through Him, to accept Him as their Savior, and serve Him as their King in the fellowship of the church.”

b) making a weighty claim on people’s lives

c) shared by Christians day-to-day and face-to-face, and

d) calling them into a Church that is worshipping, serving

5: An underlying theological issue is the relationship between Christ and Church. The 19th century theologian Friedrich Schleiermacher said that Protestants get to the Church through Christ, and Catholics get to Christ through the Church; it may be too simple but does tell us something. We as a properly catholic and reformed tradition have to wrestle with this question. I find the image Paul offers in II Corinthians, that the Church is the treasure in the breakable clay pot, the two being inseparable by God’s mysterious will. The Church is not the treasure, but the location where it is invariably found.

6: Uncertainty about the future is good insofar as it makes us depend more radically on the grace of God. In the nearer term I am optimistic about the preservation of our Prayer Book.  I believe this is key for our Church, for it must be mined so as to reclaim, and be renewed by the Holy Spirit.  No less a source than Bishop Griswold recently called for this. Likewise, my sense is that younger clergy, liberal and traditional, have equally no taste for a new BCP - as with many things, it’s the boomers who have an issue. We need patience, with longer and deeper attention paid to our own way of praying and hearing God’s Word than is currently held by a wide spectrum of Episcopalians today.  Ojala que sea en la providencia Dei!