Diane Stanton, long known for her work in Uganda, received the highest honor awarded by Nashotah House Seminary. The ceremony was held in conjunction with the Seminary’s Commencement on May 23. The award, named for the Most Reverend Arthur Michael Ramsey, the 100th Archbishop of Canterbury, is given to persons “whose service . . . exemplifies the world-wide vision of compassion and care” that characterized the Archbishop’s ministry. 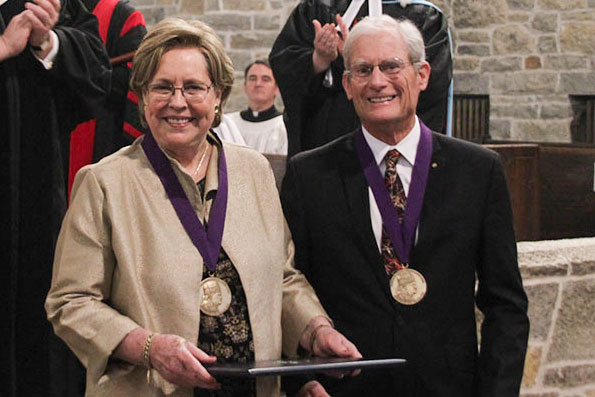 Stanton currently serves as Executive Director of the Kellermann Foundation, which supports the work of medical care, nursing education, and primary education for children in Bwindi, the area famous for its rainforest gorillas and the Batwa Pygmy people. She shared the award with Dr. Scott and Carol Kellermann, who came to Bwindi in 2000 at her invitation. The three honorees have worked closely together for almost twenty years in one of the most remote parts of the world. That ministry has saved thousands of lives.

Mama Diane, as she is affectionately known throughout Uganda, first began to work with the Batwa Pygmies in 1994 at the request of Uganda’s Archbishop, Livingstone Nkoyoyo. The Batwa had been evicted from their rainforest home by the government out of concern for the gorillas who also lived there. The Batwa were ill prepared for a future outside their native habitat, which they had shared with the gorillas for millennia. They had no land, no money, no skills, and no hope.

That’s when the Anglican Church of Uganda stepped in to offer assistance. Stanton developed a plan with the local diocese and, together with the Diocese of Dallas, procured land for the resettlement of the Batwa groups. Over the years, that initial effort grew to offer basic education, home-building, and spiritual ministry. Then came the need to deal with health issues.

The region is home to more than 100,000 people whose annual income is less than $350. A survey in 2000 showed that one-third of children in Batwa households died before age 5. Infant mortality, malaria and malnutrition were the primary causes. The Kellermanns first met Diane in the late 1990s. Episcopalians from California, they then travelled to Uganda where they began to offer basic medical care, often under nothing more than the shade of a tree.

The Kellermanns returned home, sold their practice, and moved to Bwindi to undertake a long-term ministry that continues to this day. Today, their initial work has flowered into the Bwindi Community Hospital, the Bwindi Nursing School, and the Batwa Development Project. The 128-bed hospital is rated among the best in East Africa. The nursing school provides RN-level education to over 350 local students, who pass the rigorous national examination at the rate of 100%. And the development project provides agricultural education, micro-financial development, and fosters efforts to preserve Batwa culture.

The infant mortality rate has dropped substantially. Today, 97.3% of pregnancies result in live births, and 97% of children with malnutrition are successfully treated. Nurses provide health education in the homes in order to promote proper nutrition and sanitation. Childhood education remains a high priority, and many of the Batwa are now going on to receive University educations. Thanks to the Kellermann Foundation, most of the dozen Batwa communities now have “bandas,” sheltered places for worship, education and community gatherings, an idea promoted by Stanton. And the provision of clean water has also been a priority: each of the bandas has a water catchment system to provide clean water for the local group.

Thanks to the tireless work of this trio, countless doctors, dentists and eye-care specialists from around the world now bring their gifts and skills to help the people of Bwindi.  Stanton has engaged the help and support of local institutions as well: UT Southwestern is now on board, and the EPICS program at UT Dallas is providing a team of student engineers each semester to revamp the hospital’s data systems.

For Stanton and the Kellermanns, the motivation to assist the Batwa has been Christian witness. Diane relates the lore of the Pygmies: “When God created the world, the Batwa were the last to come to Him. ‘I am sorry,’ He said. ‘I have given everything away. All I have left for you is this forest.’” So the loss of their home marked the loss of everything, including basic dignity. “But one day,” Diane says, “several of the Batwa women came up to me and said, ‘We feel like whole people now.’” It was a touching moment. And it spoke volumes.

The Batwa of Uganda may have felt the deep pain of being forgotten, even by God. But they are forgotten no longer. And that fact has now been recognized by the giving of the Ramsey Award.