Let us review.  The first guidepost says: beware of theology which treats talk of God as a description of our own religious experience. And the second warned that God’s cause and our own, especially political, don’t readily line up.  But this leaves a question: how can we know of, and speak about God, since He is God, Whose thoughts and ways aren’t ours?

This third guidepost is called ‘Dios dice’, Spanish for “God speaks.’  I am alluding to the words from the Latin translation of the Psalms, Dominus dixit, the Lord spoke, a text with famous music by handel.  God speaks! Dios dice! That is what I want you to remember.  God is all powerful and quite capable of accommodating himself so that he can speak for himself and make himself understood by us. To be sure, there will on our side always be more to learn, since we are humans. Still God speaks!  And where we can be sure that he has reliably spoken and speaks still is in the bible.  There we do find information, about Him and about the world, but primarily he addresses us- God speaks, to you and to me!

Now at this point you may be anxious, because you have come from a certain kind of conservative evangelical background, and you are worried that you will be regressing into fundamentalism.  But that is not a justified concern. For fundamentalism is a specific kind of theory about how the bible refers in relation to scientific theories about the world.  And you do not need to agree with such a theory in order to believe that God can speak and has spoken to us. He is able! Fundamentalism also tends to reject the idea that the Bible included editing,  a process of passing the text on, and of course copying in the ancient world that had no printing presses. The God who chooses to use the prophets and apostles is quite capable of using handing on, and a process of collecting and editing that material.  We believe that he has been in the entire process in order to – speak!  For example, the four gospels are four faithful memories of the Lord, with specific memories added, and retold with emphases to convey who he was. They are stereoscopic, so as to see him better.  And through it all- God speaks, and to you!

Of course, God being God, His speaking is different from ours. A philosopher named Austin wrote in the last century about what he called ‘performative utterances.’ By this he meant words that do things. When the priest ‘I now pronounce you…’, you’re married, ready or not!  Something happened. This is a hint of what God speaking means. For when he speaks, the world comes into being. And when he speaks, Jerusalem falls.   And when he shall speak the heaven and the earth will pass away.  Jesus the Son said on Easter evening that his word given to the apostles will affect the forgiveness of sins!  That word and its power are not from us. God speaks into being what he speaks of.  His word is supremely performative.

We are creatures only, but we have been given ears and minds to hear- that is part of what it means to say that we are in the image of God.  To be sure, because we are cracked, we also misunderstand, argue, and forget. So there will be struggle over the interpretation of God’s speech from our side.  But the Reformers in the 16th century importantly stressed that on the things that matter most, the bible’s plot line, who God is, and his gift of grace, the bible is clear and we can see what it is getting at. We may be obtuse, but on the biggest things, God speaks and we can hear.  That is what you and I are doing in morning prayer or our own devotions and Sunday morning- speak to me Lord, hablame Senor, your servant is listening, and may what you say to me be so in me. 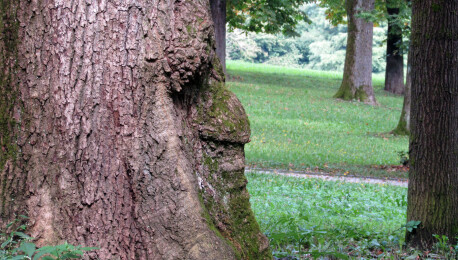