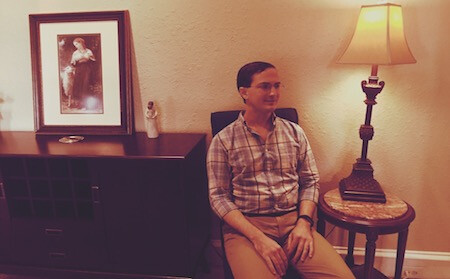 “So what do I do now?” I’d just attended church that morning on purpose—and not merely as an unwilling tag along—for the first time in years, and I wasn’t even sure why. Fr. Bill had received my visitor’s card and was phoning me back. I explained that although I didn’t exactly believe in God, I felt somehow drawn to the faith. So what next? His response was simple and unforgettable: “Pray, read the Bible, and keep coming to church.”

That last instruction amused me. Coming to church was not my habit at that point. Although I had grown up United Methodist, I left Christianity in college after finding it increasingly difficult to defend. Politicians dragged the cross into the mud. Clergy abused children behind church walls. Evangelicals cried persecution and drew their sabers on the battlegrounds of Chick-Fil-A and Duck Dynasty. Hypocritical congregations ostracized the different. Neighbors went unloved. Under the gaze of a loving God, none of this made any sense, least of all Jesus Christ himself, a man who was also God, who died, became alive again, and literally floated into the sky so that Beulah could pray for a good parking spot. This confusing mess burdened me, and life actually felt easier after I abandoned my beliefs.

But now, fifteen years later, in January 2014, on an impulse that Fr. Bill later ascribed to the Holy Spirit, I visited Epiphany in Richardson, where a couple of friends were members. Jennifer and Rich were pretty surprised when I asked to visit their church! That Sunday, Epiphany observed Epiphany, its feast of title, with incense, seasonal music, and a Nativity play including the Magi. Midway through an arcane and serious liturgy, young and old alike stepped to the front to read scripture in handmade costumes of angels, shepherds, and animals. After the sermon, we stood and declared some astonishing things, particularly that Jesus Christ, true God from true God, did indeed die, rise, and ascend. I remember wondering, “Do these people really believe this?” (On Easter that year, I would realize that I believed every word of the Nicene Creed, but this seemed impossible that first Sunday.)

When we finished singing the doxology, the organ continued to play, and one of the kids from the Nativity play led us in a moving ritual of censing and bowing. Amid soaring organ music and rising smoke, an irreverent pair of polyester lamb ears bounced up and down with each swing of the thurible as though this were the most natural thing in the world. As we sang the closing hymn later on (No. 118, “Brightest and Best”), I surveyed the room and marveled at what could pull together old and young, couples and singles, conservatives and liberals, to do these odd things on a weekend morning.

Of the three instructions Fr. Bill issued me that afternoon over the phone, the third, “keep coming to church,” has been fruitful in the most unforeseen ways. Initially, I remained a spectator and drew mainly from the sermons, the scriptures, the hymns,  and the bread and wine. Over time, however, I found that going to church was the principal way I learned the answers to my initial question, “So what do I do now?” Ultimately, those answers went well beyond Fr. Bill’s three. The mysterious force drawing me to church continued to pull me beyond it, into a life of discipleship, service, and holy surprises.

It’s simple. Just walk through the doors that are opened for you. There are only three doors.

I first learned about the three spaces for evangelism from Deacon John Sundara. He advised me on how we can reach the large and growing Indian population in Plano. I had questions about the people. What do they fear, love, and want? And most importantly, what do they need and how can Resurrection Episcopal Church meet those needs? But reaching anyone with Good News is about opening doors.

In forming relationships there are three spaces that become more intimate as you walk through each door. In Space 1, we have passing surface conversations, like the ones I have with a familiar bank teller or someone in the checkout line. In Space 2 there is an opportunity to build relationship and the conversations can be longer. If I offer a class at a Recreation Center and see the same families every week, I become a familiar person with an opportunity for us to share what’s happening in life. We can talk about work, family, or even share prayer requests. In Space 3 we share at heart level, which is really where anyone would talk about their relationship with God. When I’ve walked through the first two doors and then someone asks me to coffee or we sit down for a meal together, then we’re at the level of relationship where we can really form a lasting connection.

Church planters create opportunities for connection. Resurrection Plano recently hosted a Family Fun day at a local park (Space 1). We’ve scheduled recurring “Pray-Ground” experiences for families through a local mom’s organization (Space 2). And I let it be known to all our groups that I’m always available to meet (Space 3). But it isn’t just for the priest to do. Any member should see and walk through the three doors.

It’s Simple. Now you try it! What three spaces can you create to meet new people and open doors?

Posted by The Rev. Leslie Stewart with