Moving into the Neighborhood

10 He was in the world, and the world came into being through him; yet the world did not know him. 11 He came to what was his own, and his own people did not accept him. 12 But to all who received him, who believed in his name, he gave power to become children of God, 13 who were born, not of blood or of the will of the flesh or of the will of man, but of God.

14 And the Word became flesh and lived among us, and we have seen his glory, the glory as of a father’s only son, full of grace and truth. 15 (John testified to him and cried out, “This was he of whom I said, ‘He who comes after me ranks ahead of me because he was before me.’”) 16 From his fullness we have all received, grace upon grace. 17 The law indeed was given through Moses; grace and truth came through Jesus Christ. 18 No one has ever seen God. It is God the only Son, who is close to the Father’s heart, who has made him known. 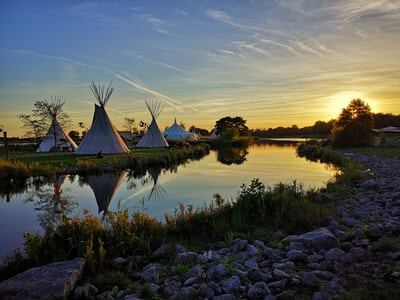 Today’s reading from the Prologue of the Gospel of John is both theologically majestic and profound. Opening with the words “in the beginning” in the same way as the creation account in Genesis starts, the incarnate Word of God is linked with the very act of creation. The One who made all things in the beginning now comes among the created order as the commencement of a new creation of those redeemed by God: “the Word become flesh and lived among us.” In recent years, this verse has received much attention and caused delight through Eugene Peterson’s colorful paraphrase in The Message: “The Word became flesh and blood and moved into the neighborhood.”

As social creatures, human beings have lived communal lives in various “neighborhoods” throughout time. Some tribal people of the Great Plains in North America lived nomadic lives in portable settlements allowing them to follow the great herds of bison which provided their sustenance. Others such as the Mandan people of North Dakota developed permanent agrarian villages along the banks of the Missouri River where they lived in large, round earth lodges and grew corn, beans, pumpkins, and sunflowers. Still others, such as my Potawatomi ancestors of the Great Lakes region moved seasonally in camps to harvest maple sugar, wild rice, and berries.

Jesus was a member of the house of Judah, one of the twelve tribes of Israel. His people lived in small villages such as Bethlehem and Nazareth but also in larger cities such as Jerusalem in the Middle East. Ironically, there is a certain sadness in the stately account of God coming among us, of Christ’s “moving into the neighborhood.” The narrator notes that “he was in the world, and the world came into being through him; yet the world did not know him. He came to his own but his own people did not accept him.” Other translations render it: “He came to his own home, and his own people received him not” (RSV), or “he came to his own people, but they didn’t want him” (MSG). One quickly gets the picture that rejection is part of Jesus’ human experience from the beginning.

This reality calls to mind scriptures in other books of the Bible when Jesus is rebuffed or snubbed. At that first Christmas, when Mary gave birth to her firstborn son, “she wrapped him in bands of cloth, and laid him in a manger, because there was no place for them in the inn” (Luke 2:7). One time in Nazareth where he had grown up, people took offense at his teaching. In response, Jesus said: “Prophets are not without honor, except in their hometown, and among their own kin, and in their own house” (Mark 6:4). Clearly, those who have experienced rejection while attempting to do good are in remarkable company. God in Christ understands.

On the other hand, the narrator also adds to the reality and pain of the possibility of rejecting the incarnate Word of God this proviso: “But to all who received him, who believed in his name, he gave power to become children of God.” Phillips Brooks, nineteenth century bishop of the Episcopal Diocese of Massachusetts, must have been thinking of these passages when he wrote his well-known poem that has come down to us as the Christmas Carol “O Little Town of Bethlehem.” One of the stanzas reveals:

So God imparts to human hearts the blessings of his heaven.

No ear may hear his coming, but in this world of sin,

Where meek souls will receive him, still the dear Christ enters in.

May Christ, the incarnate Word of God, be welcome in the hearts and neighborhoods of people from every nation, race, tribe, and language. In the words of my Potawatomi ancestors: Mno gishget Jesos egi nigit! (Merry Christmas!)