In the Nave 1: The Human Being as Creatures 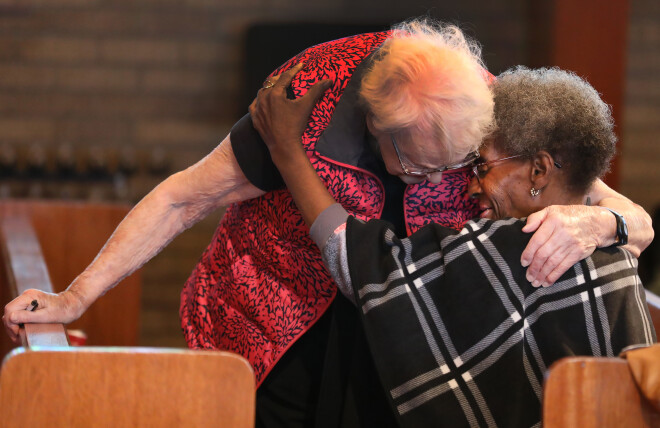 If the nave is evocative of Noah’s ark, or of the boat with the disciples and our Lord heading across the Sea of Galilee, then its occupants are the redeemed, the faithful, the people of God.  Though they be so called, they are no less human beings, sons and daughters of Adam and Eve, and so we will consider them first of all. As such they are brothers and sisters to their neighbors who do not yet believe. We need then to begin with this common inheritance, and burden, going back to the first chapters of Genesis.

Before we begin this new section in earnest, we should note that what it means to be a human being may seem to be self-evident, but is not, given our present cultural situation.  Is death inevitable? Is gender a given? Is anything a given? Can we be genetically or chemically redesigned, as are animals? Is the border between computer and human certain?  Can consciousness be captured and replicated? Questions that would have seemed crazy a generation ago are now asked in certain quarters. Throwing the human into question brings it into relief, which in a sense makes it easier to present its distinctive qualities.

The first thing to say is that we are creatures. This includes being subject to change, time, limits, but it says more than this. These conditions are given us by God, the Creator. We are creatures in contrast to, and thus in implied relation to, God.  A creature isn’t the Creator (which makes the incarnation comprehensible precisely in its scandal).  Even in heaven we do not cease to be creatures, though of a transformed kind we cannot yet describe (I John 3:2, ‘Dear friends, now we are children of God, and what we will be has not yet been made known. But we know that when Christ appears, we shall be like him, for we shall see him as he is.’).

As creatures we are called to wisdom, that is, to understand our condition before God, to receive its limits as a gift, ‘to number our days.’  That we struggle to do so captures in a nutshell much that we will have to say in the coming sections.

You might say that God redeemed creation out of non-being by creation (and that the redeemed are a ‘new creation’), hence the close connection between God’s work of creation and redemption.  Both are ‘good’ in His eyes, and so in ours.  An extreme way to put this is to consider what is called ‘annihilationism,’ the idea that the lost simply cease to be in the judgment, as this seems more merciful. But for Thomas Aquinas, for example, the mere fact of being, even for the eternally lost, is a blessing. The Biblical person could never say, as did the ancient Greeks, ‘better that he had never been born…’.

Google a version of the ‘Jubilate Deo,’ Psalm 100, and discuss its contents.