Hide Not Thyself from Thine Own Flesh

The command comes from Isaiah 58, recently read at Morning Prayer. Through the prophet, the Lord is contrasting true faith and false. He says: if you really want to be serious about your faith, then practice “the fast that I [the Lord] have chosen,” namely, “loose the bands of wickedness,” “let the oppressed go free,” “break every yoke,” “deal thy bread to the hungry,” “bring the poor that are cast out to thy house.” The clincher, the final image of a true religious fast, is this: “when thou seest the naked, that thou cover him; and that thou hide not thyself from thine own flesh.”    In one sense, all very familiar: faith without works is dead, so pay attention to the poor, the oppressed, the hungry.    In another sense, all very simplistic: some yokes are not oppressive but right judgment, brought upon people for good purpose. The prisoner who is guilty has the opportunity to face his sin; however messy it is, in the normal course of things God does use worldly government to advance the human good.    And so, all too easy to put it out of mind.---    At the coffee shop, he sits at a corner table, laptop opened, hour after hour after hour. He’s always there.    “Do you know anything about that guy?” a friend asked me. No, I said, do you? “I asked the clerks once; they said he’s usually quiet, but on occasion gets out of hand.” The mind turns to a supposition of mental illness, a need to stay on medication. “At least he’s warm,” I said.---    There he was, at his corner table. I was sitting outside, on the other side of the glass, focusing on my usual tasks. In my peripheral vision there was another person with him, a woman. I half-thought, how nice, someone’s talking to him. But I kept at my task and didn’t look up.    Until I was ready to go. Then as I gathered my things I saw two youngish people, a woman and a man, sitting near him. Talking with him. They were there with a patiently attentive posture, looking at him, saying I know not what—they were inside, and I was on the other side of the glass.    It was time for me to go. The cock was crowing.---    Out & About. This Sunday, February 12, I’ll be speaking at Church of the Holy Cross, 4052 Herschel Ave., Dallas. I’ll be talking at 9:30 about Losing Susan, and then preaching at the 10:30 mass.    The following Sunday, I’m to preach at the 10 a.m. service in McKinney, at St. Andrew’s new Westridge campus: 2301 Eden Dr., McKinney.    There will be a three-week class on Losing Susan at Incarnation, starting Monday, February 27, at 6 p.m. Each week we’ll take up one part of the book: I’ll offer some theological reflections on that part of the story, and then we’ll open it up for discussion. Incarnation is at 3966 McKinney Ave., Dallas. 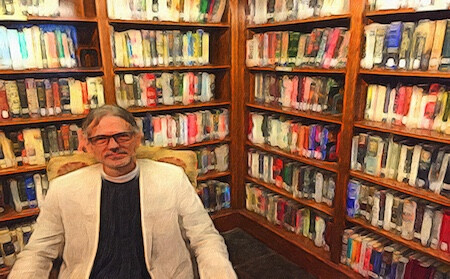 One of my favorite walks these days is to get on the Katy Trail—that abandoned train line that runs for 3.5 miles up from the center of Dallas—and meditate on the morning’s scripture readings. Back in New York, there was a rock outcropping in Central Park that drew me to the same end. As the sky turns from black to grey to blue-pink to dull yellow (all those shades of color for which I wish I knew the names!), one’s heart turns from self-absorption to wonder, from many concerns to thanks to praise.

The birds beat me to it—the praise, I mean. Every morn they are out there greeting the newness and glorifying the one who makes it, the “re-creation of the new day.”---    No matter how early I get out there, others are ahead of me. But there was one day, Saturday, December 31, when I found myself completely alone. I walked at least a mile, and saw no one. It was dark still, maybe 6 o’clock.    “Where is everybody?” The mind turns over the possibilities, as the heart probes its secret dreads. Could it be that God has taken away all the others, and that I have been left alone?---    Rapture theology is bogus, of course. N. T. Wright has demonstrated that being caught into the air in order to greet the Lord when he returns means that our Lord will not have to enter our city alone: his people will come out to greet him, and bring him in. So we need to hold 1 Thessalonians together with the final chapters of Revelation: that heaven comes down to earth, in the end, and that there is a marriage of the two.     We don’t escape the world, ever. The world gets transformed by God, as his will gets done on earth as in heaven.---    So the theology is bogus, but this theologian’s heart knew its worry. Of a certainty, no one (else) is on the Katy Trail this early morning because everyone else, now sleeping in, will be up until midnight, bringing in the new year. Yes, but the heart still needs its assurances. “You won’t forget me, will you? You won’t go off without me? I can come and stay with you, right? Or, you’ll come back and stay here, right?”    The heart wants to know if it’s true: He will come again to judge the quick and the dead. And his kingdom will perdure without end.    Just then, as if in answer, as I turned back to home, I saw someone else on the trail.---Out & about. This Sunday, February 5, is my final class session on “Strange but True Things about God.” The topic this week is prayer. What sense can it make to be talking to the creator? Harry Potter cannot talk to J. K. Rowling! And more, what sense is there in making requests to the author of all things? And so forth. The class is in room 119 of the education building at Church of the Incarnation, 3966 McKinney, Dallas. It runs from 10:20 to 11:05.    Recordings of previous class sessions are eventually posted on this page: https://incarnation.org/class-recordings/    On Sunday, February 12, I will be at Church of the Holy Cross, 4052 Herschel Ave., Dallas. I will speak about “Losing Susan” at 9:30, and preach at 10:30.