About a week from Santiago still, I had a day that went on longer than I had planned; there hadn’t been any place available to stop for the night. Then, mid-afternoon, I discovered a small albergue with an open bed. It was in a room for four; the other three beds were taken by three lovely folks from a small village in France.

I learned, eventually (through their broken English and my non-existent French), that several years ago this group of long-time friends, all retired, had wondered if they had the physical strength to walk the Camino. So they practiced on the trails and hills around their village, and decided to give it a try. This was maybe seven or eight years ago.

They had started about 500 miles from Santiago. Each year they came and walked for awhile. The following year they’d come back, picking up where they had ended the previous year. Recently they could not come, because of Covid. This was their final year. They were maybe 50 miles from the end, and they were intending to make it.

I did not see them on the following days. In Santiago, albergues are everywhere, since there could be a thousand or more pilgrims arriving in a day. I was in a small one with 22 beds. And there they were also. We were all delighted at the coincidence.

One of them had hurt her knee and was walking with crutches. Nonetheless, they were full of smiles.

The massive cathedral has four pilgrim masses a day, with the ones at noon and 7:30 p.m. being packed. I had got there at 6:45 and had a seat. The pew beside me filled, and then someone left, and then a couple of others arrived. I turned: they were the two still-ambulatory French folks.

The pilgrim mass is the end of the Camino. This cathedral, which holds the remains of James, brother of John, disciple of Jesus—to pray here has been the destination in a certain formal and real sense. As thoughts of the route passed through my mind, there was also the thought: these people beside me have walked for years to get to this point.

The next morning we took a picture before we parted. Today I know people in a remote French village who have promised me a place to stay, should I ever be so fortunate as to get to visit them. Along with that knowledge, I have a vision of friends who helped each other with cheer and faith over many years of walking.

The Camino is a true allegory of a Christian life. 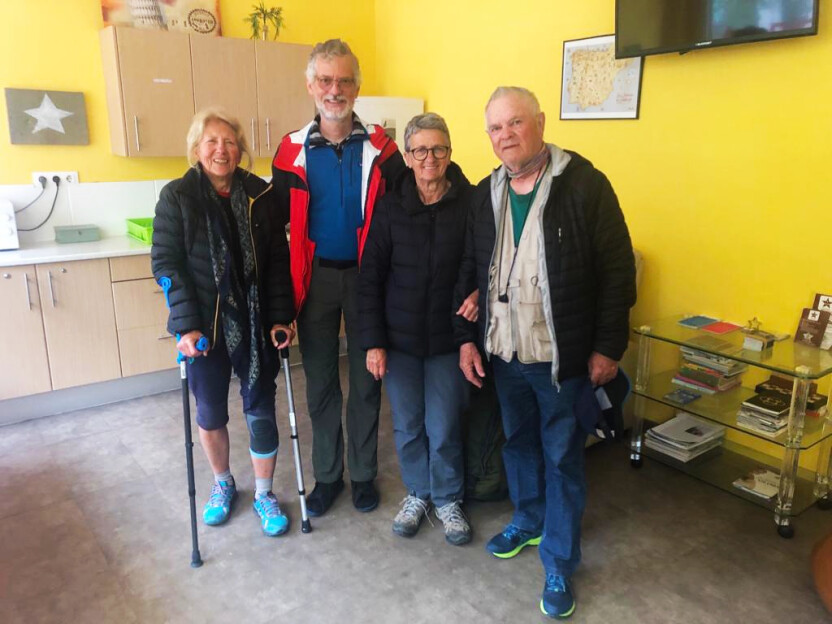 Posted by The Rev. Canon Dr. Victor Lee Austin with
(Login/Register to leave a comment)