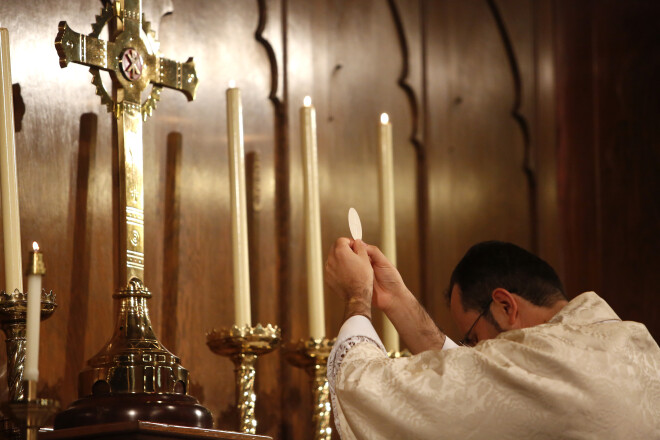 We are building a spiritual temple within which the believers sees the true God and worships as we were made to do. At the center of such a space is the altar whereon the life of Jesus was played out and still affects us, the one who is appropriately the center of the witness of the New Testament, and of the church who hears it.

Best to grasp what its claim about Jesus, consider four truths about him which familiarity has obscured. First, rabbi Jesus, according to all the Gospels, forgave sins. This was reserved for God - who is this Jesus to claim such a power to himself? (Equally surprising was his tendency to claim nothing to himself - ‘can no one ‘father’..., ‘ no one knows the hour...’ He shows utter audacity and humility.

Secondly, he dies a cursed and shameful death, one in which he cries out to his God with the alienated words of Psalm 22. This was at best a ‘minority report’ in messianic expectation. No one supposed the anointed would ‘become sin who knew no sin’ (II Cor 5:21).

Thirdly, he is raised, but ahead of schedule. This was to happen at the last day, the ushering in of the Kingdom of God. Here too the prophecies are fulfilled, but in a shocking way. What does it mean both to enter and await that kingdom?

Fourthly, and as a result, the early Christians worshipped Jesus. But this was reserved for God. What it meant to do so was what five centuries of churchly reflection on the Trinity and Christology would clarify over time.

Fully God and fully human, bearing our sins, asking us who we believe to be, but doing so in the mode of surprise: that is where these four too-customary shockers should lead us.

Read Philippians 2:6-11 in this light and discuss.

The Sanctuary C.1 Who is Jesus? Taking Him on His Own Terms We now turn to the New Testament, a dense and profound literature which can be approached in many ways.  A good place to start is with what all the writings share, and what their shape tells us.  They all center, obviously on Jesus of Nazareth, who is the Messiah, the Son of Man, the Word of God, the Lord, etc.  While the terms differ, and deserve analysis, they all make a serious claim about Him. They all would have us start and finish our account with Him, as Revelation’s ‘Alpha and Omega.’

Jesus was a powerful, impressive, difficult, mysterious figure. Even Pilate wants to speak with him. Bystanders are impressed, though some think he has a demon. Being amazed with him doesn’t mean that some don’t write him off as another wonder worker.  He can argue like a rabbi, but has ‘authority’ unlike any of them. He seems to claim and yet doesn’t, the title of ‘Messiah.’  The rabbinic Jesus of a movie like Zeffirelli, or the revolutionary Jesus of Pasolini, the agonized Jesus of Gibson, (and one could add more examples), are all true enough but not exhaustive.

The picture is further blurred by the project in modern time to strip away so-called myth and rediscover the true historical Jesus behind the Gospel stories.  The great scholar (and missionary doctor) Albert Schweitzer delivered the coup de grâce for this effort when he said that all such reconstructors were as people looking down a well so as finally to see His face across the centuries, only to realize they were seeing their own. Of course, Jesus was an historical figure, and there are things we can say about Him as such, but we have to read the accounts ‘with the grain’ to hear what they want to tell us about who He was.

So let us begin with several simple facts. Roughly at the mid-point of the Synoptic Gospels (Matthew, Mark, Luke) Jesus poses the key question to the disciples: ‘but who do you say that I am?’ And yet all the Gospels give their testimony to who He is on the far side of the resurrection.  He appears, even during His life, in its light.  ‘We seen Him from a solely human point of view no more.’ (II Corinthians 5:16)

A disproportionate amount of the Gospels relative to the actual chronology was spent in the retelling of the story of his death.  The great German scholar Martin Kaehler called Mark a ‘passion narrative with a long introduction.’  This tells us where first to look to understand who He is.

In all the Gospels the question provokes controversy, especially around its audacity: ‘He forgives sin’, something only God can do.  He casts out demons, something to be done when the great day of the Lord has come. But to see these things, and to follow, these require trust, courage, the willingness to hear - they are not self-evident.

“I am trying here to prevent anyone saying the really foolish thing that people often say about Him: I’m ready to accept Jesus as a great moral teacher, but I don’t accept his claim to be God. That is the one thing we must not say. A man who was merely a man and said the sort of things Jesus said would not be a great moral teacher. He would either be a lunatic — on the level with the man who says he is a poached egg — or else he would be the Devil of Hell. You must make your choice. Either this man was, and is, the Son of God, or else a madman or something worse. You can shut him up for a fool, you can spit at him and kill him as a demon or you can fall at his feet and call him Lord and God, but let us not come with any patronizing nonsense about his being a great human teacher. He has not left that open to us. He did not intend to.”