The Gospel according to Saint John has (besides its opening hymn and closing appendix) two parts, which Raymond Brown calls “The Book of Signs” and “The Book of Glory.” The signs are miracles that point to truths concerning Jesus. The first one is the changing of water into wine at the wedding at Cana. The last one is the raising of Lazarus from the dead. All together they indicate that Jesus is one with the Father, and that his purpose on earth is to open a way for those who believe in him to become God’s children by adoption.

In the second part of John’s Gospel (chapters 12–20), Jesus performs that which was signified in the first part. He gives plain teaching, by example and word, to prepare his disciples for their future life. The example is washing their feet. The teaching in word culminates in his declaration that they are his friends. He then performs the ultimate act of friendship, laying down his life for his friends. This act precipitates the revelation of his glory: as king on the cross, as conqueror of death, as giver of the Holy Spirit.

Thus do signs yield to glory. There is nothing quite like Saint John’s Gospel in all ancient literature. It is full of love and beauty. Many of us, when we came new to the Bible, were told to read John first. And just as often, we come back to John after we have read much else. First and last, it is a beloved gospel.---

There is a mystery about signs. No sign is ever sufficient to prove the reality or truth of that to which it points. Signs must be interpreted, and they can be misinterpreted by mistake, and worse, they can be willfully misconstrued. It takes humility and openness to be able to receive a sign, and a basic generous disposition towards the sign-giver.

That’s why the opponents of Jesus don’t see the signs. Their hostility and pride preclude their seeing the truth that is before them. So for instance, when a man born blind is given sight, they see wilfulness in Jesus, refusing to submit to the Sabbath’s holiness. The miracle of giving sight is not, for them, a sign of who Jesus is.

But what can we do if we want to see God’s signs? There are no guarantees. But it seems that a certain humility is required, and an avoidance of cynicism. What one seeks is a certain breaking down of one’s hard heart. And also — thankfulness. People who “count their blessings” seem to see more signs of God than the rest of us!---

The following Saturday, October 7, I will speak to the OMGs (“Outrageously Mature Group”) at Church of the Annunciation in Lewisville, Texas; the program runs from 9 a.m. to noon. The topic is: Your future is greater than your past.

Sunday, October 8, I will be preaching at the 9 a.m. and 11 a.m. services at All Saints’ Church in Phoenix. At 10 a.m. I will be teaching on caregiving and suffering, with reflections drawn from Losing Susan. Among the many delights of visiting Phoenix, I would like especially to note the privilege of being in a place where it’s always Standard Time.

And looking ahead: The fall theology lecture, October 22, Church of the Incarnation in Dallas, 6 p.m.: “What Good Is Authority?” Even though it can and will err, authority is necessary for us to be fulfilled as human beings. I’ll be looking at the topic not only in broad terms but also (to help us see what it means) in particular forms: the authority of clergy, and how authority functions in sport.

The Cattle Upon a Thousand Hills 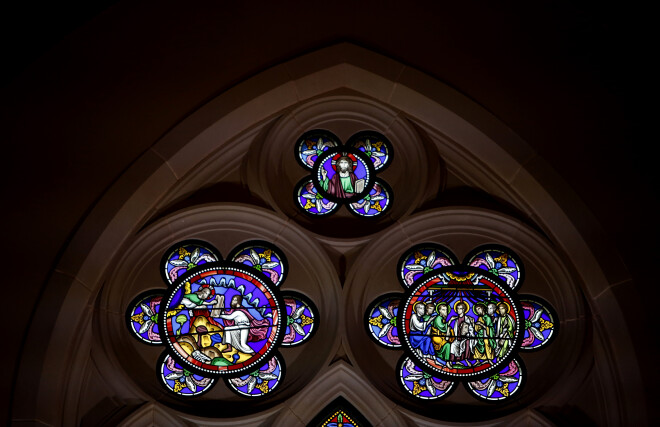 A theme of the Old Testament is that God doesn’t want ever more sacrifices—burnt offerings and other such things. In Psalm 50, for instance, when God is unhappy with Israel, he says it is not because of their sacrifices. “I will not reprove thee because of thy sacrifices,” he says. And “as for thy burnt-offerings, they are alway before me.” God then turns ironic. “I will take no bullock out of thine house, nor he-goats out of thy folds.” God isn’t going to take any of our animals. The reason is that he has plenty at hand! “For all the beasts of the forest are mine, and so are the cattle upon a thousand hills.” And not only are there a lot of them, God already knows and sees them. “I know all the fowls upon the mountains, and the wild beasts of the field are in my sight.”    The clincher is next: “If I be hungry, I will not tell thee”! God, of course, is never hungry; he doesn’t need to eat animals; but even if he did, he wouldn’t need our food.    It’s good ironic poetry. It amuses us. But there’s a hook in it. If God isn’t going to tells us if he is hungry, what sort of thing might he tell us?---    There’s nothing about God himself that God tells us. Anything he says will be a revelation of who we are and what we should do, and some of that pertains to our relationship with God. But through it all, God himself remains a mystery.    And that mystery moves us to many things.---    One movement: to a respect for all the things in the world. The beasts, the cattle, the fowls, the wild beasts; the forest, the thousand hills, the mountains, the field; all are God’s, known and loved by him.---    Right after these verses, Psalm 50 has this: “Offer unto God thanksgiving, and pay thy vows unto the Most Highest.” This, the Coverdale translation (slightly adapted in the 1928 Prayer Book), is different from its translation as the familiar communion verse instructing us to offer a “sacrifice of thanksgiving.” Here it is just “thanksgiving.” What can we offer God? Thanksgiving.    I think it is the fundamental human duty. Whoever we are, whatever our circumstances, our first task is to give thanks. “It is very meet, right, and our bounden duty, that we should at all times, and in all places, give thanks unto thee.”    Giving thanks to God is part of paying our vows.---    Psalm 50 goes on to argue against “the ungodly” who ignore God’s words, speak wickedness, slander people, enjoy the company of thieves, and so forth. And the end of the psalm promises that the one who “ordereth his way aright” will see the salvation of God.    So thanksgiving, the heart of goodness, is wrapped around with a concern for godly relations with other people, and an awe-filled respect for the other beings in this world. May we remember the cattle upon a thousand hills!---    Out & about. I will give the Fall Theology Lecture, “What Good Is Authority?” at Church of the Incarnation, Dallas, on Sunday, October 22, at 6 p.m. Among other things, I plan to speak on how authority works in practice, taking as examples clergy authority and authority in sport. So, our favorite topics: church and sports! The lecture is free and open to the public.