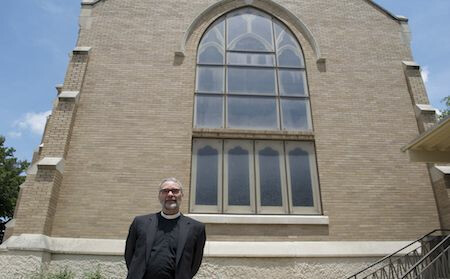 Lex Orandi lex credendi ('the law of praying is the law of believing '): a personal example and appreciation

Recently, I attended the consecration of the new suffragan Roman Catholic bishop of Dallas, on whom we pray for God's richest blessing. The last consecration I attended was a blur! This one was striking and moving in a deeply theological way. I want to mention several of their customs and what they tell us about the nature of the church itself.
The nuncio for the USA from Rome read a letter with the seal of the Holy Father himself, the 'servant of the servants of God', which Francis surely is. Then the suffragan to be sworn to maintain and pass the faith unchanged to for the next generation (there are a slew of questions one could ask about 'the development of doctrine' but the goal itself is clear).  The apostolic continuity of the gospel was powerful conveyed. Then, and in the same vein, accompanied by a soloist singing "veni Sancte Spiritus," the bishops in attendance came in a long line to place their hands on Raymond Kelly's head in silence. Like the ministry itself it was at once personal and 'not about us.' Likewise the homily emphasized the new bishop's gifts and his being one more sinner living from divine forgiveness.
Next came the ordination prayer. An enormous Gospel book, like a canopy, was held over his head. The tabernacle in which the setting apart takes place are the words of good news. Martin Luther's heart would have been made glad. Finally a considerable amount of chrism was poured on his head with a prayer for a 'mystical anointing' of his ministry. The image of a share in the high priestly office of Jesus, the anointed one, His alone and yet shared with His people, was dramatic and clear.
Ordinations are moments when we display and set forth who we are by grace as the Church.  We are set apart under the word, in the line of the apostles, as servants of Jesus 's high priesthood.  May we in this Lenten season give thanks for this vicarious gift to us as well.

Whose Missio? Which Dei?

If only I had a quarter for every time in the last ten years when someone has referred in a Church event to the ‘missio Dei,’ the ‘mission of God.’ I once heard it as the justification for a mind-numbing account of a national church administrative budget, and I knew the victory was complete. The charitable reading is that the expression is a way to say that it’s about God and not us, that He has a plan wider than our narrow imaginations. If I speak ill of those claims, may my tongue cleave to the roof of my mouth. Just the same, the warning of the late Bishop Stephen Neill about the old-fashioned term ‘mission’ has pertinence: where everything is mission, nothing is.

A word about the origin of the word makes the picture clearer. After World War II, there was a crisis in thinking and planning for world mission. The West felt guilty about colonialism, and the younger churches had grown. Secularism was on the rise, and the Christian influence could no longer be taken for granted. Neo-orthodox theologians stressed God’s prevenient action and not our own willfulness. In the midst of all these influences, mission scholars in the 1950’s began to use this expression to emphasize that we are but ‘servants for Jesus’ sake.’ But the action they spoke of was that of the great deeds of salvation found in the Biblical narrative. (The young Lesslie Newbigin would be counted among those who turned to this expression). Our task is to get with the program! We are to let ourselves be caught in the updraft of God’s work. Along came the 1960’s and a far more secularized notion of that work came into vogue. It was primarily in the world that He works, and the Church came to be seen as secondary. (A theologian like Hans Hoedendjik would be an example of this trend, though one might count Harvey Cox’ The Secular City here as well). And how are we to tell that this popular movement is part of the wind of God? More and more political criteria were used, and more and more those judgments lined up with prior allegiances- surprise! Newbigin spent years in the later 60’s and 70’s protesting this drift. But by the beginning of the 21st century this history seemed forgotten in the various streams of the missional movement. That underlying question of how we tell whose missio and which Dei continued to be the key one.

This is of more than academic interest? The term remains a covert point of contention about how we are to understand the content of our faith and the direction of the Spirit’s leading. These are enormous questions. Sufficient unto the day is a modest proposal: let us speak not of the missio Dei, but rather of the missio Christi. Given that we are Trinitarian Christians they ought to be one and the same! But the latter reminds us that we know who that God is in the revelation of Jesus Christ. It should drive us away from a somewhat vague expression and back to the specific testimony about Him in the Bible. There alone can we hope, in humility, where that mission is leading us.