Whose Ethics? Which Authority? 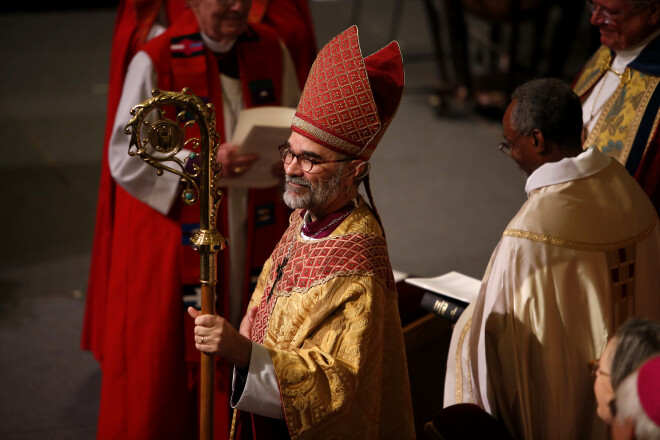 In the interest of transparency, let me be clear that this blog entry is half-book report, half-advertisement! Philip Turner, known to many as a writer in ethics and Anglican life, professor at Southwest, and interim at Incarnation, will be visiting next month to talk about his book, Christian Ethics and the Church: Ecclesial Foundations for Moral Thought and Practice. I want to encourage clergy, as well as any others interested, to attend (on Thursday, February 18, at 10 a.m., at the Cathedral).

Ethics has often been thought of in terms of the way decisions are made: should I follow rules true for all everywhere? Or consider primarily the kindness of the outcome case by case? Or see how much a decision advances toward a certain goal of human life? These questions are important, and the differences they generate are real.

Turner, however, asks us to go at the matter from a different vector: what is the community, or the sphere, in which the decision is lodged? Do I imagine ethics to have to do with myself, and the costly advance toward holiness? Or should I have my eyes fixed on society as a whole and the pursuit of justice there? Or, thirdly, and mostly aptly to Turner’s mind, do New Testament ethics have most to do with the shape of the community of the Church truly conformed to the crucified and risen Christ?

All kinds of questions can follow, and doubtless will when we meet. In each case, how is allowance made for the alternatives? Is there a judgment made here about the nature of our time and culture? What would move the Church toward this self-understanding?

Turner is a master of the pithy story capturing his point. At the very end of the book he tells of service in the Ugandan bush where a shamanistic figure stands before the congregation, sacred root, a kind of amulet, in hand, and says: ‘Jesus lives! Burn it!’ How can one unfurl ethics from that story?

Let me offer an example consisting of but one page in this rich book. Turner deals with the collection Paul helped to take up for the struggling Christians in Jerusalem. Obviously it met practical needs. But his explanation of why it was needed used loaded theological terms like ‘grace’ and ‘reconciliation.’ The point was the ‘connection of commonplace things… with the highest mysteries of the Gospel.’ (pg. 164, quoting Lionel Thornton). Turner then goes on to relate this to the idea of a culture of gift as it has been developed by anthropologists. What are the nature and limits of such a society, and how can the Church be one? There is a deep theology of stewardship to be found here. For our life too, commonplace and Gospel-laden, mean to be one, and Turner can help us to see this.

There is great interest among more traditional Christians, evangelical as well as catholic, these days about what a theological commentator named Rod Dreher has called ‘the Benedict Option.’ My goal in this post is, quite simply, to describe what they mean by that expression, and what is packed into it.   It refers of course to St. Benedict of Nursia, who, in the sixth century during the midst of a time of social disruption and confusion associated with the later Roman Empire, repaired to the isolation of Monte Cassino and began a monastic community (who descendants following his rule were named after him). It is relevant to note that most of traditional Anglican spirituality had a debt to this tradition. While the order and its rule were characterized at the time by moderation, it all sounds quite austere to us -- a meal of mostly vegetables and then up at 4 a.m.!

There ensued a time in Western society of lost learning, fragmentation, and threat. Christian learning was preserved for the most part in monastic communities where reading, praying, and working could be held together and mutually supported (hence the motto ‘ora et labora,’ ‘work and pray’). While this sounds, and was in a way, ‘isolationist,’ it was less so historically than it might seem. The Benedictines were an active lot, planting new monasteries throughout Europe and evangelizing those around them -- and learning to fortify wine to boot!

What has all this to do with today?   Enter a Catholic moral theologian named Alisdair MacIntyre, who has been massively influential over the past two generations. Perhaps his main observation has been one of incoherence: when people have an argument over moral issues in our culture they seem to be speaking past each other. He observed that moral claims arise from a nest of things: a goal for human life, an implied list of resultant virtues, a narrative into which we fit ourselves. The popularity of this last word can be attributed in part to him. When these differ among communities, they seem to address the same question, but their answers slip past one another. MacIntyre went on to contrast some major streams of moral thought in modern society: liberal, (which assumes a voluntarist and individualist vision of the human person), its more radical critique, and a religiously based traditionalism (which he associated with the Catholic Church). At the end of his book, After Virtue, he wondered if the age we are entering did not require a new Benedict to begin a new kind of monastic communities. You can see how this assumes a greater distance from ordinary society, small greenhouses of the Christian life. A number of influential theologians, not least, Stanley Hauerwas of Duke, have been themselves influenced by this account.

You don’t need to be Amish to have a moment of sympathy for MacIntyre’s call. Who has not heard about the latest account of cloning, or witnessed the fondness for consumerism or lurid celebrity, and realized how hard it is to raise a Christian in the midst of it all? At the same time, one must note that Anglicans have usually wanted to steer closer to culture, and this has posed for it problems as well as presented opportunities for influence. At the same time, Third World Anglicans could teach us a thing or two about the Benedictine.

I will limit myself to one observation. Related to this analysis is the renewed emphasis on formation, catechism. Communities must do a better job of conveying their vision. A ‘Benedictine’ community is a teaching one. And if MacIntyre is right, this must take place in an holistic and mutually reinforcing way: instruction, worship, service, witness, all providing the crucible in which an alternative vision of the world could emerge in a new believer. At the same the emphasis on learning and charity should ensure the moderation on breadth of vision we would wish. Obviously there is a debate to be had here; I recently read a ‘friendly amendment’ in Christianity Today called the ‘Wilberforce option.’ At the very least it is a salutary debate to enter.