A Cranky Piece of Scripture

Jesus spoke to them in parables, saying: 2 “The kingdom of heaven may be compared to a king who gave a wedding banquet for his son. 3 He sent his slaves to call those who had been invited to the wedding banquet, but they would not come. 4 Again he sent other slaves, saying, ‘Tell those who have been invited: Look, I have prepared my dinner, my oxen and my fat calves have been slaughtered, and everything is ready; come to the wedding banquet.’ 5 But they made light of it and went away, one to his farm, another to his business, 6 while the rest seized his slaves, mistreated them, and killed them. 7 The king was enraged. He sent his troops, destroyed those murderers, and burned their city. 8 Then he said to his slaves, ‘The wedding is ready, but those invited were not worthy. 9 Go therefore into the main streets, and invite everyone you find to the wedding banquet.’ 10 Those slaves went out into the streets and gathered all whom they found, both good and bad; so the wedding hall was filled with guests.

11 “But when the king came in to see the guests, he noticed a man there who was not wearing a wedding robe, 12 and he said to him, ‘Friend, how did you get in here without a wedding robe?’ And he was speechless. 13 Then the king said to the attendants, ‘Bind him hand and foot, and throw him into the outer darkness, where there will be weeping and gnashing of teeth.’ 14 For many are called, but few are chosen.” 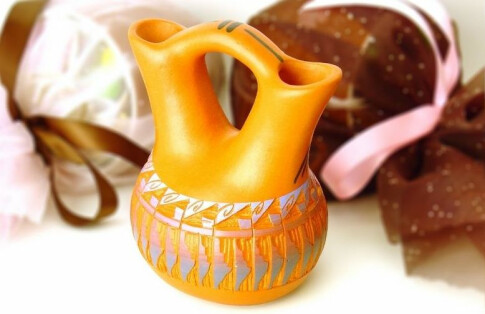 Wait, what? This is not the kind of story we expect to hear from Jesus. It seems a king invited guests to a wedding feast for his son, but those so summoned refused to attend and even treated the king’s messengers with contempt and violence. In return, the enraged king visited the full fury of his wrath on them and invited anyone he could find to replace them, guaranteeing that the wedding hall would be filled with guests. In an unexpected turn, however, one of the substitute invitees is thrown out because he is not properly clothed. What gives?

Minnesota humorist Garrison Keillor one time referred to this passage as a rather “cranky piece of scripture.” Cranky or not, Jesus told stories for the purpose of imparting the wisdom of God to his hearers. Sometimes we need to dig deep, however, to uncover the treasure buried therein. This is one such story. For example, what might the wedding robe, the lack of which got the guest excluded from the banquet, represent?

St. Augustine in the fourth century preached that the wedding garment which features so prominently in the parable is “love.”  Some Eastern Orthodox Christians understand the wedding robe to be the white baptismal garment presented to the newly baptized. Still others understand the wedding robe to be Christ himself, “for all of you who were baptized into Christ have clothed yourselves with Christ – have put on Christ” (Galatians 3:23).  I am wondering if the lack of the appropriate wedding garment symbolizes our indifference to the graciousness of God and apathy to the needs of the poor. Perhaps the one who was cast out to “outer darkness” was simply lazy about his commitment to the kingdom of God.

The king is hosting a wedding banquet. While wedding customs differ from culture to culture and tribe to tribe, one custom common among some Native Americans is that of the Wedding Vase. A clay vessel with two spouts is filled with water from which the bride and the groom drink separately and then together, symbolizing both their individual uniqueness and their strength and unity as a couple. The clay of the vase reminds me that we are formed from the earth by a good Creator (Genesis 2:7). Since water is essential for the life of every creature and plant, its ceremonial drinking calls to mind our physical birth from our mothers and for Christians our spiritual birth through the waters of baptism.

We have been invited by the king to a wedding feast. “‘For this reason a man will leave his father and mother and be joined to his wife, and the two will become one flesh.’ This is a great mystery, and I am applying it to Christ and the church” (Ephesians 5:31-32). God wants the banquet hall to be filled with guests who will respond in honor of his son. All are invited. How will you reply? Will you attend? What will you be wearing?

Wanted: Fruits of the Kingdom

33 [Jesus said:] “Listen to another parable. There was a landowner who planted a vineyard, put a fence around it, dug a wine press in it, and built a watchtower. Then he leased it to tenants and went to another country. 34 When the harvest time had come, he sent his slaves to the tenants to collect his produce. 35 But the tenants seized his slaves and beat one, killed another, and stoned another. 36 Again he sent other slaves, more than the first; and they treated them in the same way. 37 Finally he sent his son to them, saying, ‘They will respect my son.’ 38 But when the tenants saw the son, they said to themselves, ‘This is the heir; come, let us kill him and get his inheritance.’ 39 So they seized him, threw him out of the vineyard, and killed him. 40 Now when the owner of the vineyard comes, what will he do to those tenants?” 41 They said to him, “He will put those wretches to a miserable death, and lease the vineyard to other tenants who will give him the produce at the harvest time.”

42 Jesus said to them, “Have you never read in the scriptures: ‘The stone that the builders rejected has become the cornerstone; this was the Lord’s doing, and it is amazing in our eyes’?

43 Therefore I tell you, the kingdom of God will be taken away from you and given to a people that produces the fruits of the kingdom. 44 The one who falls on this stone will be broken to pieces; and it will crush anyone on whom it falls.” 45 When the chief priests and the Pharisees heard his parables, they realized that he was speaking about them. 46 They wanted to arrest him, but they feared the crowds, because they regarded him as a prophet. 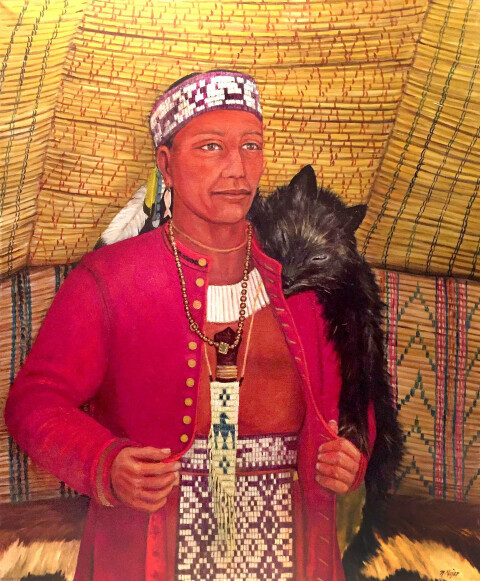 Gifts for the Massasoit Ousamequin, 1621 was painted by Ruth Major. More of Major's Fine Art can be seen at ruthmajor.com

Storytelling is a traditional part of Indigenous cultures in that it is the historical way customs, values, information, and spirituality were passed on to succeeding generations. Similarly, Jesus also teaches through the practice of storytelling by narrating his parables. In today’s Gospel lesson, Jesus recounts the story of a landowner who leased his property to tenants who were not willing to provide the landlord with a just return on their mutually agreeable agricultural investment.

Then as now, it was not unusual for a farmer to rent land from property-owners in return for a percentage of the crop. I can remember as a young person picking up pecans on a “halves” arrangement with the owner of the trees. Given that this landowner planted a vineyard with a wine press protected by a fence and watchtower, the obvious crop desired in the story is wine. But no wine was to be forthcoming from the wicked tenants who resisted the landowner’s claims by abusing and murdering the servants sent to collect their master’s pay. They even killed the landowner’s son in an ultimate act of defiance. The traditional polemical interpretation of this story is against the religious leaders who had ignored the prophets sent by God, including Jesus himself. On another level, however, the story calls into question the ownership of the vineyard, as well the appropriate behavior of those who utilize the land.

In one of the creation stories of the Judeo-Christian tradition is a tale about the First People who inhabited the earth in a garden planted by the Creator. The Creator placed his two-legged creature, a human being, in the garden to “till it and keep it” (Genesis 2:15), thereby entrusting humanity with the responsibility of acting as stewards of creation. The two-legged did not own the garden but God did. Adam was simply to serve as caretaker of the Creator’s good garden which was full of beauty and food.

This tradition of stewardship of the land was carried on in various places including Turtle Island, a continent that later became known as North America. Here there were and are families of people who do not view the earth as their possession but rather as a gift to be respected and honored. One such person was Ousamequin the Massasoit of the Wampanoag confederacy in seventeenth century. He is remembered both by Native and European Americans because of his relationships with English colonizers in Massachusetts and Rhode Island. The Massasoit is quoted as asking: “What is this you call property? It cannot be the earth, for the land is our mother, nourishing all her children, beasts, birds, fish, and all people. The woods, the streams, everything on it belongs to everybody and is for the use of all. How can one person say it belongs only to an individual?”

One of the challenges of Jesus’ story to us is whether we are stewards or owners, not only of the land but of all our possessions. The attitude is of ultimate importance. Are we caretakers of or rulers over that which has been entrusted to us by the Creator? The landowner rightly expects a return from the vineyard; a harvest of new wine is expected from the tenants.  Jesus warns that “the kingdom of God will be taken away from you and given to a people that produces the fruits of the kingdom.” What new wine, what fruits of the kingdom is God expecting from you?