A Man Had Two Sons

23 When [Jesus] entered the temple, the chief priests and the elders of the people came to him as he was teaching, and said, “By what authority are you doing these things, and who gave you this authority?” 24 Jesus said to them, “I will also ask you one question; if you tell me the answer, then I will also tell you by what authority I do these things. 25 Did the baptism of John come from heaven, or was it of human origin?” And they argued with one another, “If we say, ‘From heaven,’ he will say to us, ‘Why then did you not believe him?’ 26 But if we say, ‘Of human origin,’ we are afraid of the crowd; for all regard John as a prophet.” 27 So they answered Jesus, “We do not know.” And he said to them, “Neither will I tell you by what authority I am doing these things.

28 “What do you think? A man had two sons; he went to the first and said, ‘Son, go and work in the vineyard today.’ 29 He answered, ‘I will not’; but later he changed his mind and went. 30 The fatherwent to the second and said the same; and he answered, ‘I go, sir’; but he did not go. 31 Which of the two did the will of his father?” They said, “The first.” Jesus said to them, “Truly I tell you, the tax collectors and the prostitutes are going into the kingdom of God ahead of you. 32 For John came to you in the way of righteousness and you did not believe him, but the tax collectors and the prostitutes believed him; and even after you saw it, you did not change your minds and believe him. 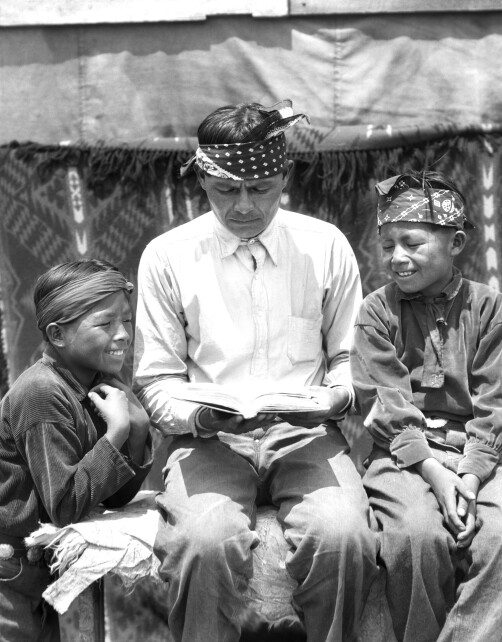 I recently saw a meme on social media that sarcastically proclaimed: “Wow, your Facebook post about politics has changed my mind and my vote … said no one EVER!” While changing one’s mind due to social media may be a near hopeless occurrence, changing one’s mind is of utmost importance in the portion of today’s reading known as the “Parable of the Two Sons,” especially as it relates to the issue of regret, starting over, and walking in a new direction. The father had two sons whom he directed to work in the family enterprise. One son at first refused, but later changed his mind and complied with the father’s command; the second initially agreed but then changed his mind and neglected the father’s order. Which decision is preferable? Jesus’ response: to do the will of the father, no matter how long it takes to orient one’s mind to act.

One understanding of the “tax collectors and prostitutes” in Jesus’ story is that they represent those people who lead lives that are disobedient to God due to their treacherous, exploitative, and immoral actions. They are headed in the wrong direction in terms of the Creator’s plan and divine purpose for their existence. They journey on a road that leads to death, but God wants them to change their minds, to turn around, and to begin to walk in a different direction on a path with the trail-blazer Jesus, who is both a traveling companion and is himself “the way, and the truth, and the life” (John 14:6). They are the first son in the story who change their minds and eventually go to the vineyard and receive the father’s approval.

The “chief priests and the elders of the people,” the religious authorities who are fearful of looking weak and very much enjoy their privilege and status as respected leaders of the establishment might well be considered the second son.  They waver in their commitments, are fearful of being wrong, and although they feel superior to many in the community are unwilling to change their behaviors regardless of the evidence in front of them. They see no need for a change of mind to result in a change of heart and behavior. They might have started out well but have since chosen to walk the path that leads to death.

God has granted us tremendous freedom in acting as moral agents in making decisions and changing our minds for good or for ill. What we decide really does matter. There is a teaching in Native America about the Seventh Generation. According to the Great Law of the Haudenosaunee of the Iroquois Confederacy, thought by many to be among the oldest participatory democracies in the world, is taught: “In our every deliberation, we must consider the impact of our decisions on the next seven generations.” That is, whatever we decide today should take into consideration how it will affect seven generations of our descendants coming after us. That is long term strategic planning indeed and wisdom sorely needed in our immediate-gratification culture!

The Creator is calling us to work in the vineyard today, but the Holy One leaves the choice about whether to do so in our hands. Regardless of our past, we have an opportunity to change our minds and to walk in a new direction that leads to life. Today, we make choices that impact not only ourselves, our children, and grandchildren but generations to come. Now is the time to join the tax collectors and prostitutes in the kingdom of God. Even if we have said “no” before, there is still time to say “yes.”

Are You Envious Because I'm Generous?

[Jesus said,] “For the kingdom of heaven is like a landowner who went out early in the morning to hire laborers for his vineyard. 2 After agreeing with the laborers for the usual daily wage, he sent them into his vineyard. 3 When he went out about nine o’clock, he saw others standing idle in the marketplace; 4 and he said to them, ‘You also go into the vineyard, and I will pay you whatever is right.’ So they went. 5 When he went out again about noon and about three o’clock, he did the same. 6 And about five o’clock he went out and found others standing around; and he said to them, ‘Why are you standing here idle all day?’ 7 They said to him, ‘Because no one has hired us.’ He said to them, ‘You also go into the vineyard.’ 8 When evening came, the owner of the vineyard said to his manager, ‘Call the laborers and give them their pay, beginning with the last and then going to the first.’ 9 When those hired about five o’clock came, each of them received the usual daily wage. 10 Now when the first came, they thought they would receive more; but each of them also received the usual daily wage. 11 And when they received it, they grumbled against the landowner, 12 saying, ‘These last worked only one hour, and you have made them equal to us who have borne the burden of the day and the scorching heat.’ 13 But he replied to one of them, ‘Friend, I am doing you no wrong; did you not agree with me for the usual daily wage? 14 Take what belongs to you and go; I choose to give to this last the same as I give to you. 15 Am I not allowed to do what I choose with what belongs to me? Or are you envious because I am generous?’ 16 So the last will be first, and the first will be last. 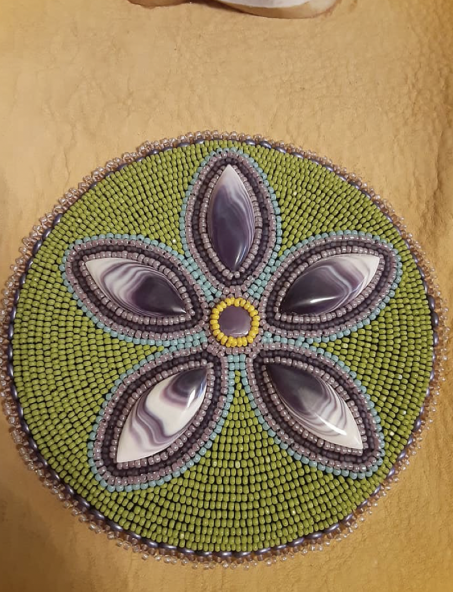 This beadwork was crafted by Jennifer Jordan, an enrollee of the Oneida Nation of Wisconsin. More of her work can be seen at www.facebook.com/jennibeads.

“Are you envious because I am generous?” I do not want to admit it, but I guess the answer is yes. After all, that story is so unfair. What justice is there in paying farm laborers who work for one hour the same as those who work for twelve hours? It simply does not make any sense from a human perspective. I suppose, however, Jesus told this story especially for folk like me, those who identify with the laborers who work from dawn to dusk, those who need help in remembering that grace is “God’s favor towards us, unearned and undeserved” (BCP 858), and that none of us gets what we actually deserve—we get better. Jesus is consistent about this. In another place he reminds his disciples that “when you have done all that is commanded you, say, ‘We are unworthy servants; we have only done what was our duty’” (Luke 17:10).

St. Benedict, in his six century Rulefor monasteries, also dealt with the question of whether fair treatment of members of his monastic community was synonymous with equal treatment when he wrote: “We do not imply that there should be favoritism—God forbid—but rather consideration for weaknesses. Whoever needs less should thank God and not be distressed, but whoever needs more should feel humble because of his weakness, not self-important because of the kindness shown him. In this way all the members will be at peace” (RB 34.1-5).

A deeper dive into this text, however, reveals even more treasure. We encounter that familiar biblical word denariusor “daily wage.” My understanding is that a denarius was the equivalent of enough money to provide an agricultural worker and family with the necessities of life. If that is the case, the landowner in Jesus’ story is providing each worker, regardless of whether they worked twelve hours or nine or six or three or only one, with what they needed for their families’ provisions. “Give us each day our daily bread” (Luke 11:3), we pray in the Lord’s Prayer. Is not this what God is doing through the landowner in Jesus’ story, providing them with their daily necessities?

God often provides what we need through the generosity of others. Generosity is an important value of many tribal peoples. The Lakota word for it is wacantognakawhich means to show concern not only for one’s people but for all of creation by contributing freely for the well-being of all. It includes sharing not only food and possessions but also time and attentiveness, without expecting anything in return! Charles Eastman Ohiyesa of the Santee Dakota Nation, born in 1858, became a physician, author, reformer, and advocate for his people. He is quoted as saying: “Children must early learn the beauty of generosity. They are taught to give what they prize most, that they may taste the happiness of giving.”

Generosity is not only a fruit of the Holy Spirit (Galatians 5:22), it is a virtue sorely needed in our world today amidst a global pandemic and divisive political season. It is a good time to repent of our envy of God’s generosity and to give ourselves over to a spirit of big-heartedness, not expecting anything in return. Such a move just might give us a taste of the happiness of giving.