After I had used an example from modern science in a sermon, my engineer brother said there should be some rule forbidding such misuse, some quality control mechanism for sermon references on subjects we know nothing about. We would all be in trouble! Something similar applies to a blog of mine on modern art, but fools rush in….

I recently went to see the Jackson Pollock exhibit about which I am unencumbered by knowledge. But I can say this much - his art has a relationship to chaos, not only that found in the world, but also that found in his own heart (by his own account). When a mentor suggested he do more study and painting of nature, he famously replied ‘I am nature.’   I believe it was both to its and his chaos, as well as the patterns found therein, that he was referring. And so he arrived, at one stage at least, at his famous method, at throwing and spilling paint on the canvas in what seems to many to be a random way. But even in this questions are raised: how does chance play into art? And chaos? Is this the reflection of his manic depression or the other way around? In all this he is a typical modern, coming in some way to terms with randomness and chaos, at the same time trying to harness these forces within himself in his art. As such he is typical also of the romanticist impulse, to look not to order but to its opposite. He is valuable at the very least as an expression of our time and culture.

What are we as Christians to make of all this, the chaotic in the world, and the artistic attraction to these forces? The great revisionist theologian Paul Tillich flirted with such forces in his doctrine of the Spirit, but this proved a symptom in his own spiritual collapse. First of all, the Christian takes a sympathetic and yet a hard look at the world as it is. He or she knows that, as Paul said, there are no idols but there are, behind them, demons. He or she knows that we are to distrust chaos, since God is a God of order, but that we are to distrust human order too, since it can be prone to the ‘powers and principalities.’ He or she knows that the artist’s impulse too can be ‘taken captive for Christ.’ He or she knows that God has in His hand everything, chaos as well as order, the rebellious as well as the obedient, for He will in the end be ‘All in All.’ He imposes order on chaos at the first creation, and he dives down into chaos and tames it in the second. Neither ordered beauty nor chaotic beauty equals the revelation of God - He can use whatever He wills, and He has the last word. Perfect beauty, the power of the Spirit, the rushing of waters, the cascading harmonies, the earthquake of life up from death, ecstasy and adoration- these are the qualities of heaven. In God alone order and surging life are one. For the intimation of such things the artist has a place, for the subject is beyond mere reason, but it requires God’s gift for such are to be in the service of the God who slew Rahab of the chaotic deep on the way to Easter. 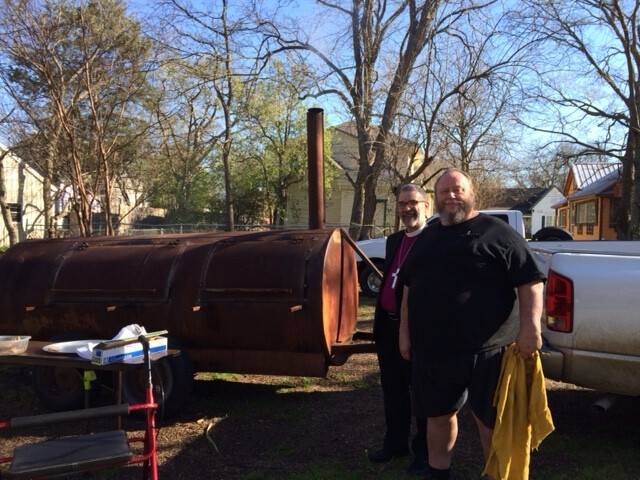 Easter is feast, not fast, tide, and this is Texas, so what better than an Easter meditation on smoker and brisket. I recently blessed a big one at Holy Trinity, Bonham. Its owner Rick told me that a similar cooker, also the size of a trailer was once stolen from his backyard - if you see that outlaw cooker headed down the highway, call the diocese!

The smell of cooking meat wafted over the church grounds throughout our Palm Sunday service. It reminded me of the following verse from II Corinthians 2:15-16:

All of this made me think of one of the most memorable moments in the walkabout. We were at St. James Kemp and heard about a feeding program aimed at kids in a neighborhood with lots of challenges including drugs. Men in the parish set up smokers at the margins and let the smell of meat waft over the neighborhood and kids came all weekend to eat - no more advertising or explanation necessary. (The story bespoke the creativity and winsomeness of that parish in general!)

Let’s reflect for a moment on the brisket model of evangelism. Paul tells us that the witness we offer to the love of God in Christ should waft. There is something gentle and gradual about that image, one that allows the Spirit to work as it will. I am not convincing others, though giving reasons has its place. I am letting the beauty of the news of the resurrection of Jesus go where it will in my neighborhood and to do its work. And it surely will, for humans are wired for it, in spite of our flaws, as surely as the sense of smell is wired at the deepest levels of our brains. People will make what they will of it too - Paul says the same odor connotes life for one, death for another. It is not for us to suppose we can determine which - we have to make sure the waft keeps coming. Paul finishes that passage with a statement about how insufficient we are for such great things. We cannot compel anything, nor are we to shirk anything. In the preceding verse he has said that we are the triumphal procession of those taken captive by the love of God in the crucified and risen Christ. It assumes incense along the way - it is a great liturgically - friendly image. We have no choice. We walk the path in His wake. It is a triumphal procession, whatever others make of it. And through those ancient streets there were odors of various kinds. Which odor predominates depends - but walk in public, amidst those reactions, we must.

All of this leaves us with an exhortation and a question. The first is the importance of confidence that the aroma will smell of life and draw the neighbors. The question is this: how best to allow the aroma to waft over our neighborhood, the Church being the Easter cooker.