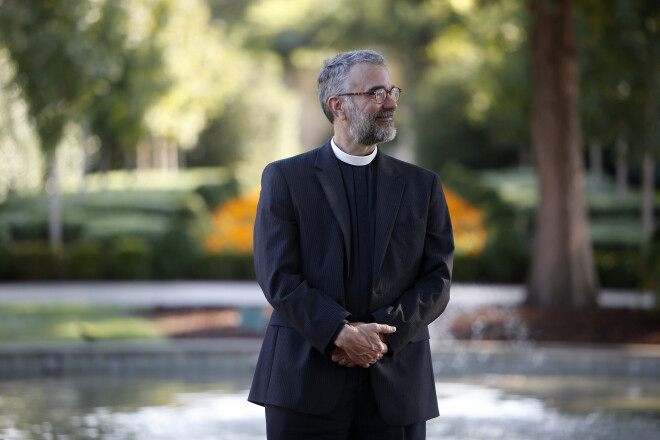 On NPR yesterday, I heard about a recent indie movie by Peter Emshwiller called “Later That Same Life.” The writer had taped a video of himself asking the cosmos various questions when he was 18. Now he, at 56, has a conversation with that 18-year-old self. It is an evocative case of time travel for anyone, but may have a particular resonance for those with children, who have stirred up a memory of themselves at the same age as their offspring. What would you want to say to your earlier self (who is after all lurking inside you at all times anyway), and how would he interrogate you back? There is that old philosophical question about how things stay the same over time - how is it still you? And now this question takes on a pertinence and insistence in such an imagined encounter.

All this made me think of another example of “time travel” in my own experience. The great theologian of dialogue with Islam, Bishop Kenneth Cragg, once stayed in our house when he visited to receive an honorary doctorate. One afternoon over tea I asked him about the great Archbishop of Canterbury, Michael Ramsey. It turned out he had a bone to pick with Ramsey, who had, fifty years earlier, closed a program for young global scholars run by Cragg at Canterbury. The bishop was 90, and after a few moments he forgot he was speaking to me, and in the fading afternoon sun, was debating once more, directly, with Ramsey, as if his shade were there with us in the room. He had some sharp things to say. I was left wondering with whom I would have such hard questions to ask, were I to reach my ninetieth year. While this is not a debate with myself, it too was one taking place ‘later that same life,’ one that finally came to expression. With which shades is your life a running interrogation? For there is always such debates within us, whose reality is assumed when therapists have their clients talk to a pillow as the form of a parent or sibling years later. It may be that what we call ‘personality’ is in large measure just such running arguments, ‘later that same life.’

All of this made me think of a point made by St. Augustine in his Confessions. As moderns we easily think of that book as a spiritual journey of discovery. But that is not how he thought of it at all. The young Augustine sought just that, as he tried first one philosophy then another, one intense relationship after another. But he remains, in his famous expression at the beginning of the book, ‘restless.’ He finds God, and when this happens he realizes that his own search was incoherent. He was simply wandering, about the landscape, his own imaginings about himself too faulty and deluded to amount to a truly coherent self that could be found. The inner debates of which we have spoken were interminable and irresolvable (though they retain their own fascination). But Augustine also thought that, when we consider our lives, God turns out to be the prime actor throughout, drawing us to Himself by means of our responses to, and even our resistances to, Him. The source of coherence and the resolution of the debates are only found, retrospectively, from the vantage point of grace. The 18 and 56 year-old need both, and equally, to be interrogated by God, and the complaint we harbored for half a century will be answered, as with Job, before the throne. We are indeed one, whole person, at peace with our neighbor, ‘later that same life’ in a more radical a way than we might first have imagined.