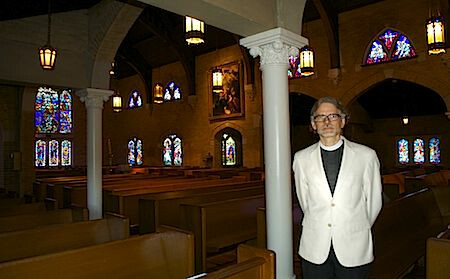 As we are working through Esther in Morning Prayer, I have been reading Yoram Hazony’s fresh commentary, God and Politics in Esther (Cambridge University Press, 2016). A principal character in the story is Mordecai, the Jewish cousin of Esther who had reared her, an orphan, as his own daughter. When the king promotes Haman to preeminence over all his other counselors, the order goes out that all people should bow and prostrate themselves before him. Mordecai refuses to do so. Why?

Hazony, in his commentary, notes that Jews are forbidden to bow down before idols. Thus the text raises the question whether some sort of idolatry is going on in the king’s promotion of Haman. That is to say, it is not obviously idolatry, but Mordecai’s refusal to bow before Haman causes us to wonder if somehow political tyranny (which is what was going on) is idolatry.

To get at this at all requires an understanding of why idolatry is such a bad thing throughout the Old Testament, indeed, perhaps the worst thing of all. Let me sketch Hazony’s interesting argument on this.

Why were such evils practiced? Because it was seen that, in exchange, people received something good. Idolatry “was actually the result of a positive human desire to ascertain the causes of suffering and ameliorate them”; it was “the first intellectual endeavor of humanity as it rose above the immediate and visible in search of effective means for treating its afflictions.” Kill a man, and the rain will come. So they did, and it did.

Yet whatever truth there was in the connection of meeting the idol’s demands and receiving its benefits, that truth was only local and particular. The idol-worshiper must close his eyes to wider considerations and stick to a “severely limited perspective.” The idol-worshiper lacks humility; he thinks “the local truth of one’s own perspective comprises truth as a whole.”

For the terrible truth of idol-worship is that it doesn’t ameliorate suffering overall but in fact makes the world much worse. The gods of such a world are always, in the end, anti-human.

Hazony says that ancient idolatry becomes, in modern currency, moral relativism, in which “human suffering is governed by local truths.” This is what Israel rejected through her prophets. They, the prophets, “insisted that the appearance of evil is governed by universal principles.”

This is why Herbert McCabe calls the Ten Commandments the great “atheist manifesto.” Hear, O Israel—there are no gods! There is, instead, one God, and one humanity, and justice is universal as it applies to all people everywhere. Hazony: “righteousness consists first of seeking the good of man—respecting his life, family, property, dignity, right to respite, right to privacy, and right to justice”—a paraphrase of the last seven of the Ten Commandments.

So, back to Mordecai’s refusal to bow to Haman. In the king’s tyrannical rule, people were bound to do whatever the king desired. Such tyranny can thrive only when people have moral amnesia. Mordecai refuses to bow because he remembers, for instance, that murder is evil. Idolatry is about forgetting the human good. Mordecai remembers.

It is an absolute knockout of a film, “Room,” about a five-year-old boy and his mother who live in a shed, locked-in, with a skylight but no windows. He was born there and knows nothing else. There is, for him, Room; outside Room is space and heaven. There is also TV. Things in Room are real; things on TV are just TV. To watch the boy, to see how literate and numerate he is, fills the viewer with awe for this mother, who has managed to teach him songs and stories, to exercise with him, to make a world for him that is interesting and stimulating, all within the confines of a space about eleven feet square. Half the film leads up to their escape; the other half deals with their entry into the normal world. He, and she, are fragile yet awesome.

Someone told me about the book that the film came from. Through a serendipitous encounter, I was loaned the book, which I took with me recently and read on a long plane ride. The book, too, is powerful. The storyline is much the same as in the film, and in this case, in my judgment, the film version maintains the strength of the book, although it is necessarily simpler.

But one thing left out of the film is the Christian story. In the book, the mother has taught the boy (from her own memory), among many other stories, stories that include Saint Peter and Saint Paul, John the Baptist and Jesus. The boy thanks Jesus when he eats. When he learns, late in the book, that he has a cousin, he thinks of John the Baptist. When he learns about someone who has the name Paul, he tells us (the book is in his voice) that this Paul is not Saint Paul. And so forth.

Was the Christianity excised as part of the necessary simplification that goes into making a film? Or was it . . . something else?

Room would be a great book for a church discussion. You could ask whether the little pieces of the Christian story that this remarkable boy knows are in any way essential to the story itself. I myself wonder whether it is significant that their escape from Room occurs round about Easter.

And we could ask—in fact, I think we Christians need to ask—why it is hard to depict Christianity in art that has integrity and power in our culture. It isn’t only “Room”: when the film version was made of P. D. James’s distopian novel, Children of Men, the priest was excised from the plot. Perhaps he was a minor character—but was he dispensable?

The bigger question—the challenge for all people of faith who are involved with the arts and media, and indeed for every parent—is how to make Christianity a compelling part of reality.

At the end of the book, they revisit Room. It is empty now, only (the boy says) a crater where something happened. A theologian has used that word, “crater,” to speak of the mark left upon the world by the Incarnation and Crucifixion. The crater was left by one who has gone ahead of us. He has gone ahead, he said, to prepare a place for us. To prepare a Room.