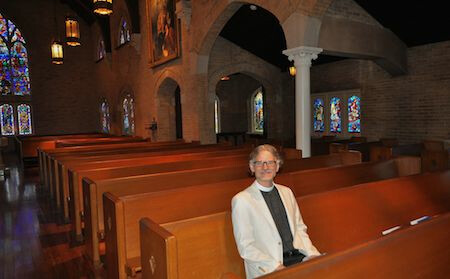 As a graduate student at Fordham University, I got to meet Herbert McCabe a couple of times when he would visit his Dominican compadre, Brian Davies. McCabe, both in his writing and his speech, was faithful to the thought of Thomas Aquinas while presenting it with wit and verve. I was telling him of my having figured out that, for Aquinas, to speak of the “eternal law” was just to speak of the being of God—that there is no difference between God himself and the unchanging eternal law that governs all things. McCabe said of course that’s right, provided (here I think his eyes glinted) we remember that we have no idea what God is!

Indeed, to have an idea of God is to commit an act of idolatry: for while we can know that God is, we cannot know what God is, but only what God is not. So I know (I really do know) that God is not a cat, and he is not a mighty fortress, and he is not the sun and the moon and the stars. He is not any of these things because all of these things are beings in the universe, that is to say, beings alongside other beings, and God is not one being alongside others. You’ll never have a line-up of four things, say, a cat, a fortress, a star, and God. You can’t line up God along with other things. McCabe says: God plus the universe do not make two.

McCabe, who was a socialist, once wrote that the greatest mystery of the universe is that God loves Margaret Thatcher. You can appreciate that line even if, like me, you happen to think more highly of Lady Thatcher than McCabe did.

But back to law. The most important part of the Ten Commandments, McCabe said, was the very beginning. McCabe paraphrased the opening of the Ten Commandments this way: “Hear, O Israel, there are no gods!” To say that the LORD is God alone is not to say that there are a bunch of candidates for being the real God, and the winner is Israel’s God, the LORD. Rather, it is to say that you don’t know what the word “God” means if you think it can be used in the plural.

The Decalogue, then—the Ten Commandments—is the Great Atheist Manifesto. It is our liberation from the presumptuous creatures who would claim to be gods, for they are not gods, they are just creatures. (Indeed, wicked, oppressive creatures; see again my earlier post on “Esther: idolatry.”) And that is the very deepest reason why the true law does not enslave us but sets us free. For the true law is nothing other than God himself, who gives us being, who supports us in every breath, who, as our creator, is closer to us than anything in the universe could be, closer indeed than our next heartbeat.

There are no gods; the LORD has made us free.

Out & About. This Sunday, October 9, I’ll be teaching on the giving of the Law at Church of the Incarnation. The class is at 10:15 a.m. in the Memorial Chapel: 3966 McKinney Ave., Dallas.

Then at 6 p.m. on Sunday, October 9, I’ll be speaking on “Thinking Theologically About Love and Disease.” This is also at Incarnation, in the education building: 3966 McKinney Ave., Dallas (RSVP ). The talk is about my book Losing Susan.

If you’d like to see Herbert McCabe, he is in this (unfortunately highly edited) video of an Oxford debate on the existence of God: https://www.youtube.com/watch?v=aivRDaTnx8M.

My personal calendar has annually “repeating events” for birthdays, dates of death, and some other dates for people who are special to me. One such person is T. S. Eliot, and September 26 is his birthday.

So on Monday, I was thinking about Eliot through the day. Four Quartets is, of course, the greatest poetry ever written. (We settled that years ago, back in college, back when we knew how to make decisions. We also decided that King Lear is the greatest play and The Brothers Karamazov the greatest novel. It’s good to have these things settled.) But Eliot wrote much other memorable verse. Towards the end of “The Love-Song of J. Alfred Prufrock,” he has a couplet that speaks precisely to the weariness of age:

I shall wear the bottoms of my trousers rolled.

There’s something comic and pathetic in that: an old man’s entire aging process reduced to some rolled-up cuffs on his pants.

I could say it’s the 128th anniversary of his birth, even as all of our birthdays that we celebrate are more accurately the anniversaries of our birth. But that’s awkward.

My calendar also has dates of death. Pious tradition has it that the day a saint died is that saint’s birthday into paradise. For all who die, the time of death is their turning over to God. Often we remember people in our calendar on the day they died. C. S. Lewis, for instance, is remembered on November 22, the date on which he died in 1963. It is a transition that parallels birth: emerging from the confines and relative darkness—the “womb”—of this creation into the more immediate presence of God.

And what then? We do not know, of “those who have gone before us in the faith,” whether they exist in a time that is parallel to ours, whether they are aware of us, whether they are at rest or in growth or being corrected or perfected in other ways. Faith knows the important point, that Jesus takes to himself all who wish to come to him. But of what that means in particular, we remain in ignorance.

It is that ignorance that creates our awkwardness when we think of our ongoing relation to people who have died. How does his life here go on now, there, in that existence beyond death for which we hope?

The awkwardness of this is, I think, authentic and salutary. It reminds us at once of our ongoing connection with the departed, and the mystery of that connection. It turns us, thus, back to God’s gift of hope. In the midst of things that are beyond human comprehension, this side of death, we yet have the divine gift of hope. It is an awkward gift, hope. It is also reality.

Out & About. Under this heading I plan to take note of talks, classes, and preaching by yours truly, as well as things in print.

Sunday, October 9, I will be teaching a 10:15 a.m. class on the Giving of the Law. I plan to draw attention to the complex character of law as both gift and sacrifice, making a connection backward from Moses to Abraham at the destruction of the cities of the plain. At Church of the Incarnation, 3966 McKinney, Dallas, in Memorial Chapel.

Sunday, October 9, at 6 p.m., I will be speaking on, and reading from, Losing Susan: Brain Disease, the Priest’s Wife, and the God Who Gives and Takes Away. There will be a reception and book-signing as well. My remarks begin at 6:30. This will be in the education building of Church of the Incarnation, 3966 McKinney, Dallas.

Losing Susan was reviewed in the September 26 issue of National Review, online here (but behind a paywall): https://www.nationalreview.com/magazine/2016-09-26-0100/victor-lee-austin-losing-susan.