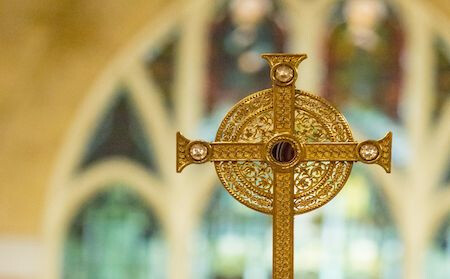 The indispensable Richard Mammana wrote recently in The Living Church about a 1963 novel, The Innocent Curate by Parish Leary. It is hard to find, long out of print, and never reprinted. It is also a rich Anglicana delight. But, under the radar, Leary’s project is to subvert the assumptions of the modern reader (and who in 1963 was not a “modern” reader?) that the matters of religion can be entirely accounted for in terms of power, vanity, and psychology. Leary creates a very ordinary (yet peculiar and funny) world into which the transcendent appears uninvited and unexplained.

The Innocent Curate is, apparently, a thinly-disguised tale of life in St. George’s Episcopal Church, Schenectady, New York: the rector and some significant lay people are principal characters, as are Holy Cross Monastery (here “the order of the Divine Ambry”) in Hyde Park, New York, and the General Theological Seminary (here “St. Dismas”) in New York City. Yet its delight transcends figuring out such alleged encodings. It has the period tone of the self-confident Episcopal world in the Northeast, a tone that has not entirely passed away. Indeed, when I lived in the Hudson Valley, one of my colleagues would refer to Roman Catholic churches as “the Italian mission.” Imagine my pleasure to find in this novel a passing reference to Sophie’s slipping out on Sunday mornings to go to the Italian mission.

Right in the midst of this world—an ambitious rector, an overbearing lay woman (“Mrs. O. Felix Cooper”) of massive wealth and ridiculously showy hyper-catholic piety, a conniving church fund-raiser who hates religion, and so on—suddenly one evening, the curate (whom no one ever thought very bright, who was always sincere and a bit simple and is known as “Sonny”), as he is carrying a tray of drinks at a church party, receives the stigmata.

The rector is aghast and instantly fears this will dash any hope of his being elected a bishop. What have you been doing? He accuses the curate of praying too much.

Sonny’s fiancee, Rosemary, who thinks religion is all hokum, decides it’s a psychological illness and gets him to visit a top-notch shrink.

Mrs. O. Felix Cooper comes to him at once, performing double genuflections every two steps as she approaches him. She wants him to become an anchorite at the Divine Ambry, locked up in his cell and never to leave it again.

The fund-raiser sees international fame and mega-bucks in this.

It’s all a delightful mess, but alas the stigmata don’t go away. Sonny just wants to be normal, but he can’t even hold his sweetheart’s hand without it getting messy. He’s bleeding, slowly and not painfully, from his hands, his side, his feet. He’s holed up in the rectory, the rector vainly hoping to keep anyone else from learning about this. The fall passes, and no change. And then it starts to happen.

Sophie and her husband, Oakes, were with Sonny when he first found the stigmata, and as friends they have since tried to offer him moral support. Yet Oakes thinks he has done a very poor job. Oakes is a strange bird: a cultured man of the South with a French wife, who has never been able to make love to his wife. This has to do with an intense relationship he had with two English friends, brother and sister, who died tragically. Oakes is lamenting what a poor friend he has been to Sonny, and what a poor husband to Sophie, when he imagines something that you, my reader, will think crazy. After a mostly silent dinner, after an evening in silence together, Oakes joins Sophie on their couch.

“I haven’t given you much, have I?” he said at length, softly. Oakes thought of the few ghastly times he had tried to make love to Sophie. He had driven himself to do it. . . . He needed desperately what she could give him; and he had failed, in agony and mortification, to obtain it. “It’s because I wanted something from you. I didn’t want to give you anything.”

“And I wanted you to make me love you,” Sophie said, looking down at him, frowning.

“Were we both being selfish?” Oakes asked. . . . “I don’t know if I can love you for myself. I’ve been thinking . . . tonight while we’ve been sitting here. About Rosemary and Sonny. About what we could give them which would help. . . . I think I could make love to you . . . not for me, but, as if you were Rosemary and I were Sonny. They can’t, now, love each other. But we could love for them.”

Rosemary gets it and says “This is a dangerous thing,” and he agrees it could destroy them. Still, they proceed.

The whole thing is wacko—it is thoroughly comedic, and I don’t think Paris Leary quite pulled it off. But what fun these pages start opening up! Leary was onto something deeply true here, a truth of moral theology, and a general truth of all life in the universe. Read it if you can (and don’t worry, there’s nothing remotely pornographic in the account of “Climax Tranquil in Venus”). And then enjoy Oakes’s sudden request of Mrs. Cooper for the loan of her relic of St. Polycarp (his femur!), and the quick race to the end of this delightful book, which shows us that sometimes, for normal life to be normal, God breaks through with something utterly ridiculous to help us see simple things.

For instance, that we find ourselves by giving ourselves away.

It was free time during a parish retreat; we were at a Dominican Sisters’ retreat center in the Hudson Valley, New York, walking randomly on the grounds. One of my parishioners pointed out a statue of Joseph holding the child Jesus. “You don’t often see that,” she said. What? I asked. “Saint Joseph with the child. Most statues are of Mary and Jesus.” She went on to make quick reference to social problems that involve men not being present for their children, and wondered if the church should emphasize Joseph more than it does.

A couple of years later, our parish had some (for us) sizeable memorial gifts, and we decided to use them to construct an outdoor altar, not close to the street but visible from it. We called it the “Saint Joseph altar,” and beside it was to be a statue of Joseph holding Jesus. I turned to the standard church catalogues of statuary, and found almost nothing. There were pages upon pages, literally hundreds of statues of Mary, or Mary and Jesus, and statues of lots of other saints. But I found exactly and only one statue of Joseph with Jesus. My parishioner was right. We ordered this statue.

A seasoned priest had told me, I know not on what authority, that every altar should be used at least once a year. We used the Saint Joseph altar twice a year. On Palm Sunday we gathered at the altar for blessing the palms, from which we would march into the church singing “All glory, laud, and honor.” Then on Father’s Day we had the whole Sunday liturgy out there, with chairs and blankets on the lawn. (In New York state, the school year ends around Father’s Day, so it was also a good Sunday for an end-of-year picnic.)--

Centuries of liturgical refinement have taught us to speak of Saint Joseph as the spouse or the husband of Saint Mary while taking care not to speak of him as Jesus’ father. This is done to protect the point that while Mary is Jesus’ mother, his father is no human being, but God himself. The angel Gabriel came to Mary, Mary said yes, and the child was conceived in her by the Holy Ghost. Saint Luke tells the story famously. Yet at the same time, Luke does not seem so fastidious as never to be able to call Joseph Jesus’ “father.” In fact, when writing about a famous incident when Jesus was 12 years old, Luke says that “his parents” went to Jerusalem annually, and when Jesus was lost and then after three days they found him, Mary says, “Son, why hast thou thus dealt with us? behold, thy father and I have sought thee sorrowing.” Mary says “thy father and I”; Mary names Joseph as Jesus’ father—which of course he was! Stepping in to a hole where love needed to be, stepping into this place where there was no earthly father, Joseph was everything a father should be to a boy. We need, methinks, to remember Joseph right up there with Mary.---Out & about. My sermon on refugees (and fathers, with some help from Saint Joseph) can be heard here.