Out of sync with the world, that’s yours truly. “We don’t serve decaf after noon,” she said to me. One would think there are lots of people who shift to decaf after their morning coffee. I hear people all the time saying, “I can’t drink caffeine after noon; it messes up my sleep.” But if it were true that people shifted to decaf, it would be available. There would be people lined up around the block asking for their post-meridian coffee unleaded. Entrepreneurs would be falling over themselves to meet the demand.    But the demand isn’t there. It’s only me.    I can’t figure it out. But it’s true: I’m out of sync with the world.---    Is it good to be out of sync with the world? Some three decades ago (back in the dark ages before cell phones and social media), my first rector was driving me around the parish. We were getting to know each other. I let it drop that my wife and I didn’t believe in TV.    He, sitting behind the steering wheel, turned to stare at me. “Victor,” he slowly said, “TV is real; it’s not something you can believe in. It’s there.”    Susan and I had decided to live, and to raise our children, without letting that intrusive thing into our home. So it happened that, when she was in second grade, our daughter was invited to speak to a neighboring class about growing up without a TV. It was as if their teacher said, “Today we have a visitor from Mars.”    Someone asked her what she did without a TV. “Well, we read a lot of books,” she said.    Clearly out of sync.---    God made this world and he loves it enough to die for it. The world, although fallen, retains created goodness. And at the end of all things (as N. T. Wright has taught us) the world will be redeemed, not discarded. So it is not good to be out of sync with the world.    On the other hand, the world is in rebellion against God. Candidates for baptism traditionally renounce the world, the flesh, and the devil. The world took Jesus’ measure and spit him out, stringing him up on the outskirts of the city and spitting on him. So it is good to be out of sync with the world.---    Decaf? It’s of course of trivial importance. But like many trivial things, there’s a sign there for me. And perhaps there’s a question there for you. Am I in sync with this world or not? And should I be? It's a real question, and it calls for discernment.---

Out & About. This is a “save the date”: The Fall Theology Lecture by yours truly will be given at Church of the Incarnation, Dallas, on Sunday, October 22, at 6 p.m. in the church. The topic is “What Good Is Authority?” There will be time for questions, and a reception will follow.
Posted by The Rev. Canon Dr. Victor Lee Austin with
August 25, 2017 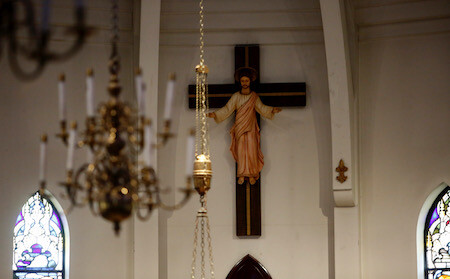 This column is an encouragement for my readers to see the film, “All Saints,” which is to be released Friday, August 25. It’s risky for me to make this encouragement, in that I have not seen the film. But I know the story it is based upon.

All Saints, a rural church in the diocese of Tennessee, was riven by discord over things happening in our church. A large proportion of its people followed their priest out of the Episcopal Church, leaving a tiny remnant with a debt-burdened building. A new priest, just out of Nashotah House and beginning a second career (he had previously been in publishing), was assigned to the church with the likely prospect of having to close it down. Then one day . . . a group of Anglican refugees from Burma (i.e., Myanmar) of the Karen tribe, people who had been doubly persecuted for their faith and their ethnicity, arrived at the church. They settled in, affecting everything. They turned some land the church owned into a farm, which actually made money. (Yours truly is amazed beyond measure at this.) They joined in common worship, creating a liturgy that was both Karen and American. And the church that was likely to close instead thrived.

The church is called All Saints, as is the movie. A few years after the Karen arrived, the priest went on from Tennessee to be a colleague of mine in New York, which is how I first learned the story. The church continues to thrive. Their experience is worth taking into consideration whenever we try to think clearly about refugees. It is also worth thought when we ponder the mission God has for us in our various congregations.

At its most basic, it is a reminder that “the company of the faithful” includes not only the people we know, but vast numbers of Christians in places and circumstances we cannot imagine. Rare, for instance, is the American who has ever heard of the Karen people. I surely hadn’t. And I marveled how they went halfway round the world and ended up at a small church in rural Tennessee. It is hard to find a better image of the meaning of “all saints.”